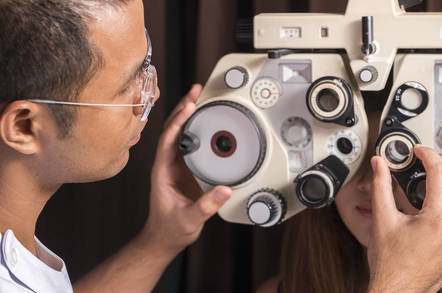 The first FDA-approved AI system for diagnosing an eye disease caused by diabetes is completely autonomous, and doesn’t require a doctor to interpret the results.

Several corporations including Google and DeepMind have been working on building machine-learning algorithms for detecting diabetic retinopathy, a leading cause of blindness among adults. The first biz to release an AI-based device that can detect the disease – and was approved by the US Food and Drug Administration (FDA) in April – is less well-known, however.

IDx LLC, an AI diagnostics company based in Iowa, America, developed the tool, dubbing it IDx-DR. The details of the system were published in a paper in Nature Digital Medicine on Tuesday.

“This is formerly uncharted territory in healthcare, making it especially critical that we ensure the highest level of safety before introducing autonomous AI into patient care,” said Michael Abràmoff, the study’s principal investigator and the founder and president of IDx.

“That’s why it was so important for us to develop an exceptionally rigorous study that was reviewed by independent physician-scientists. Now that the results have been published in Nature Digital Medicine, scientists, physicians and patients can all evaluate the scientific evidence for the safety and effectiveness of an autonomous AI like IDx-DR.”

IDx-DR uses two convolutional neural networks to detect diabetic retinopathy in patients' eyes. The first model analyses the image quality of retinal scans and determines if the focus, color balance, and exposure are good enough to pass the photos to the diagnostic algorithm. This second component looks for common signs of damage such as hemorrhages from burst blood vessels caused by unstable blood sugar levels.

The system therefore determines if a patient has signs of mild diabetic retinopathy, although it doesn’t recommend any treatment plans – that job still rests on doctors. Using an autonomous system like IDx-DR means that scans don’t necessarily have to be carried out by expert ophthalmologists and can save clinics time and money, as well as make it easier to catch and treat the early stages of the damage caused by diabetes.

In effect, the software does the job of spotting the disease in scans of people's retinas. Human doctors work out how to treat it.

It's not simple to summarize the accuracy of the system as a single percentage, we're told. Instead the paper refers to three metrics: sensitivity, specificity and imageability.

The device has up to to 87 percent sensitivity – patients who did have the mild diabetic retinopathy were correctly identified; 90 per cent specificity – patients who did not have the disease and were correctly identified as having no eye damage – and 96 per cent imageability, meaning a high enough image was generated to achieve a diagnosis. The results are based on data gathered from 900 patients.

“We’ve been working on this technology for a long time,” a spokesperson for IDx-DR told The Register. "Our founder has been conducting AI research for over 20 years; the company was founded in 2010. We’ve been in discussions with FDA for 8 years to optimize our product and develop a clinical trial that could prove the system’s safety and efficacy.

“It’s not a quick process to go-to-market when you are forging new territory in a space like AI in healthcare. Others have only entered the space in the past couple years, and now that we have broken new ground for autonomous AI and shown it can be done, we imagine many more will follow in our footsteps.” ®

Eye eye! DeepMind teams up with doctors to ogle eyeballs for illness

AI can help speed up diagnosis and seldom gets it wrong

Roundup The week's other news in machine learning