No, we're not pulling your leg 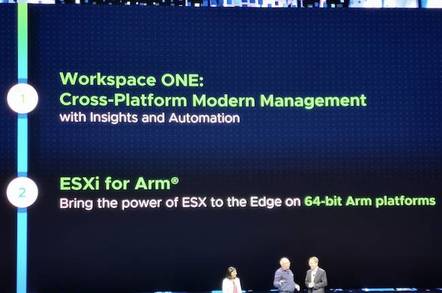 VMworld US VMware today showed off a port of its bare-metal ESXi hypervisor for 64-bit Arm servers at its VMworld US shindig in Las Vegas.

This morning's keynote audience briefly glimpsed vSphere Client managing a 64-bit Arm Cortex-A72-powered host that was running four virtual machines. The box apparently had four logical processors, two network interfaces, had been up 184 days, and was using VMware ESXi 6.8.2 build 16864140. The hardware appears to be a Marvell Armada 8040-powered device, and was said to be within a turbine generator in a wind farm.

That chipset is aimed at enterprise and home gateways. It has two 10G Ethernet ports and four 1GE or 2.5GE interfaces, four SATA 3 interfaces, PCIe buses, and the usual embedded electronics stuff like serial and flash memory connectivity.

What was therefore teased were Arm64 devices – actually a cluster of them – running Arm-compatible guest operating systems and applications on a port of VMware's bare-metal hypervisor with fault tolerance and vMotion support. It's Arm on Arm. This port is significant because VMware's ESXi is typically run on x86 systems. It means people choosing x86 over Arm at the edge due to the lack of ESXi and its ecosystem of management and monitoring tools can now start to reconsider and perhaps fit Arm-based systems into the mix.

The keyword here is tease: the virtualization giant has no concrete release dates nor any other details of availability right now. We're also not sure of the minimum and ideal hardware and operating system specifications.

VMware CEO Pat Gelsinger also stressed to journalists after the keynote that this is aimed at edge boxes and gateways – this stack is not going to displace x86-based compute servers in data centers. "We don't see any demand from customers for that," he added, meaning his customers still wanted Intel and AMD chips for their data-center virtualization workloads. VMware is working with manufacturers to get ESXi Arm64-powered devices onto the market, though, we were told.

By edge and gateways, VMware is picturing energy-efficient Arm-powered computers in small cabinets, or other tight spots where power and cooling is limited, on the edge of networks. These embedded systems could be in cars, could be in racks of telecommunications gear, could be hubs controlling internet-of-things-style sensors and equipment, and so on. And VMware hopes people will run ESXi on this class of hardware to carve up resources and run applications and services within virtual machines.

It may well be easier and safer to update devices in the field if you can push a new virtual machine or two to them, rather than have to flash the firmware. These hosts and guests can be controlled through the same user interface and tools and policies used to manage their x86 cousins. Integrating a fleet of Arm hosts into a pool of x86 systems, controlled via vCenter and vSphere, should, in theory, be frictionless, which admins and managers want.

The Register understands VMware has been working on this for years, not just porting the hypervisor but also ensuring it works with vCenter and the software goliath's other management and deployment products.

VMware needs this because while its bare-metal hypervisor is used in businesses – small, medium, enterprise – the hyper-scale cloud giants preferred their own virtualization technology, so it kinda missed out there.

Now as more work is pushed out of clouds and data centers to the edge of networks, where Arm processor cores compete with x86 rivals on power efficiency and performance, this is the moment where VMware hopes to swoop in and offer a mature hypervisor and platform – not just for x86 but also for Arm64. Thus, it hopes to avoid missing out on this emerging area: virtualization on modest-sized Arm processors on the network edge and in embedded electronics. Right now, if you want to do virtualization on Arm, you're probably using KVM.