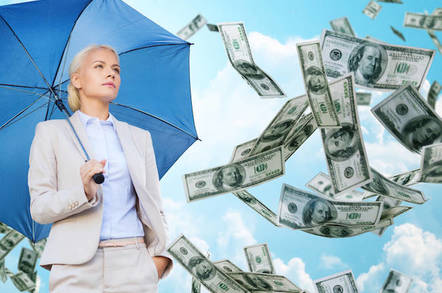 VMware keeps growing its sales like, depending on your opinion of the virtualization giant, weeds in an unkempt garden, or a lottery jackpot prize pool.

"Our networking portfolio experienced healthy license bookings growth this past quarter, with 82 companies of the Fortune 100 having now adopted NSX. We are seeing customers embrace the virtual cloud network strategy that we unveiled in Q1," chief exec Pat Gelsinger boasted on an earnings call with financial analysts following the release of the figures on Thursday.

Nine out of ten of VMware's top deals in the quarter were for its NSX software-defined data centre virtualization platform, and that led Gelsinger to claim it's "becoming the standard for software-defined networking."

Gelsinger said another upside for VMware is a move among enterprises to "repatriate some of their cloud workloads" in a more hybrid model. That provides the chance to sell its core compute platforms to those customers, and he said "that's an opportunity to sell the rest of the portfolio."

"We clearly see this hybrid computing model right, as the right answer," said Gelsinger in response to an analyst's question. "And as customers are beginning to see the strength of VMware in the cloud, they are becoming more confident in the strategic commitment to us on-premise."

Neither Rowe nor Gelsinger, however, would comment on the financial predictions made by both VMware and parent company Dell Technologies in a stock exchange filing made a few weeks ago as part of Dell's plans to go public again. In that filing was VMware's belief that by going it alone, it could be posting gross profits (EBITDA) of $4.8bn by the year 2023.