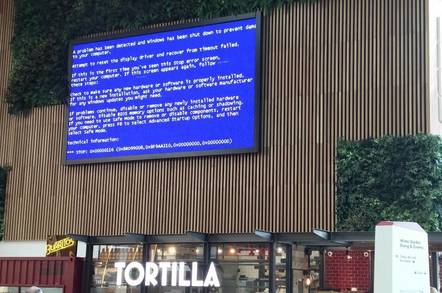 McAfee has pulled a version of its Endpoint Security software after folks reported the antivirus software was crashing their Windows machines.

The security giant said it has taken down the August update for Endpoint Security 10.5.4, and is advising anyone who has downloaded it, but not installed, to hold off installing it.

According to McAfee's advisory, the issue affects the latest versions of Endpoint Security, ENS Common Client, ENS Firewall, ENS Threat Prevention, and ENS Web Control. The software triggers blue-screen-of-death crashes on Windows 7 and 10 PCs, and Server editions of the Microsoft operating system, whether the OS is running on bare metal or in a virtual machine.

The decision to yank the update comes a week after McAfee began getting complaints from users who said the upgrade was causing both blue screen crashes and random restarts.

At least one Reg reader told us the issue is causing problems for their business. Our tipster, who asked to remain anonymous, noted that the issue, which McAfee traced back to a bad driver, seems to be worse on servers and systems with a lot of CPU cores and higher activity loads.

As of right now, the workarounds are limited to either not installing the bad update, or removing and reinstalling an older version of ENS 10.5.4. Unfortunately, McAfee doesn't as yet have an ETA on when a fixed build will land.

"McAfee is investigating the issue and is working to provide a solution," a spokesperson told El Reg. "We will communicate the latest information to our customers as soon as it becomes available." ®