Tax the tech giants and ISPs until the bits squeak – Corbyn

To save the BBC, and local journalism 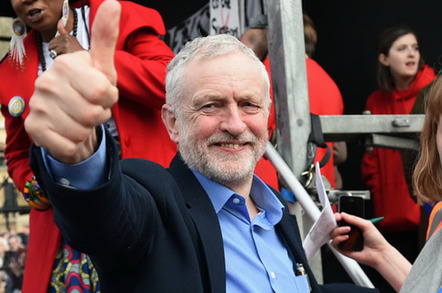 The Leader of Her Majesty’s Opposition wants to tax ISPs and “technology giants” to fund the BBC and independent journalism. With Labour 10/11 to have the most seats at Britain's next General Election, his targets are obliged to take it seriously.

“In the digital age, we should consider whether a digital licence fee could be a fairer and more effective way to fund the BBC,” he said. “A digital licence fee, supplementing the existing licence fee, collected from tech giants and Internet Service Providers, which extract huge wealth from our shared digital space, could allow a democratised and more plural BBC to compete far more effectively with the private multinational digital giants like Netflix, Amazon, Google and Facebook. This could also help reduce the cost of the licence fee for poorer households.”

Several of the intended targets, including Amazon, declined to comment. Google referred us to techUK, thrusting CEO Anthony Walker into the firing line:

“It is good to see Mr Corbyn engaging on these issues, however we need better ideas than just another proposal to tax tech companies. The Cairncross Review has been set up explicitly to look into the future of high quality journalism in the UK.  Many techUK members are engaged in contributing detailed submissions to this review and we hope that Labour will engage constructively with the process.”

The Internet Services Providers’ Association ISPA said the levy “could divert resources away from this investment and slow down broadband rollout”.

Industry sources questioned the legality of a Labour government using revenue, rather than profits, as the basis for new taxes.

Vodafone, previously criticised over its tax affairs, pointed us to its tax report, which details how much it pays in every territory.

Even beneficiaries were sceptical of the new taxes.

“The whole question of the taxation of digital companies needs addressing in a systematic way, preferably at a global level. If not there, at a European level,” Angela Wade-Mills of the European Publisher’s Council told us. “However well intended, picking off one sector, isn’t necessarily the right approach.”

Google has increased its funding of journalism. Our own application was not successful. ®