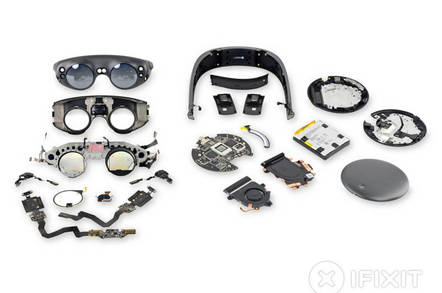 Screwdriver botherers at iFixit have turned their attention to the hugely hyped and hugely late Magic Leap One headset and reduced it to its component parts.

The Magic Leap One mixed-reality headset purports to "free your mind" while also freeing your wallet of a hefty $2,295. Sadly, while it succeeds at the latter, it has faltered somewhat at the former with a disappointed tech press taking turns to deliver the cash-burning startup a kicking.

iFixit managed to get its hands on a headset and wasted no time in stripping the thing down to see how the augmented reality is delivered to the wearer's eyeballs.

Having removed the protruding magnetic sensor coil (an odd black box hanging off the side of the headset to track the position of the controllers) the team removed the headband from the interesting stuff – the optics.

Wondering what to do with that $2,300 burning a hole in your pocket?

The Magic Leap One uses six stacked waveguides in its lenses to create multiple focus planes. This allows the generated imagery to be sliced into crisply focused and blurry areas, fooling the human eyeball into seeing depth. Stripping back the optics revealed the actual display tech itself, an OmniVision OP02222 field sequential colour device pumping six colour channels at the waveguides – red, green and blue on two focal planes, with one colour channel per waveguide.

iFixit also found twin sensor arrays placed over the forehead of the wearer with a sensor to "read" the room located on the nose-bridge consisting of an infrared-sensing camera and an IR dot project, removing the need for Rift or Vive-like receiver stations around the room.

Beneath the ring of IR sensors the team found the IR eye-trackers, which appear to be OmniVision CameraCubeChip cameras.

Connecting the optics to the headband are flex cables containing more hardware including a Movidius MA2450 Myriad 2 vision unit and a SlimPort ANX7530 4K DisplayPort receiver. Other chippery deals with USB 3 and audio amplification.

While the optics, powered by a ring of six LEDs for the RGB colours and two focus planes are neat, the Magic Leap One requires an extra bit of hardware to actually do the processing in the form of the "Lightpack", a hockey puck-like device hanging off the headset.

Magic Leap has kept shtum about who actually makes this critical component, but after a bit of careful prying, the iFixit team opened it up and found out that, hey, it needs a fan to keep cool. Clearly this thing pumps out quite a bit of heat if passive cooling isn't up to the job.

The brain of the Magic Leap is powered by a Nvidia Tegra X2 with the Pascal GPU, features 8GB of Samsung RAM and 128GB of Toshiba NAND universal flash storage along with silicon dealing with power management, USB and radio frequency needs.

The team found the battery to be almost completely inaccessible, working through layers of packaging and adhesives to get to the 36.77Wh twin cell power pack. A similar amount of power keeps an iPad 6 running.

Overall, the team were pleased to note that the speakers could be changed out with just a screwdriver and that it was possible to take the thing apart without destroying it. However, the battery gets a black mark for its inaccessibility and the lack of an upgrade path means that $2,295 investment has a limited shelf-life. The final repairability score ends up as a not-great 3. ®