It may be poor man's Photoshop, but GIMP casts a Long Shadow with latest update

Open-source pixel botherer cranks it up to version 2.10.6 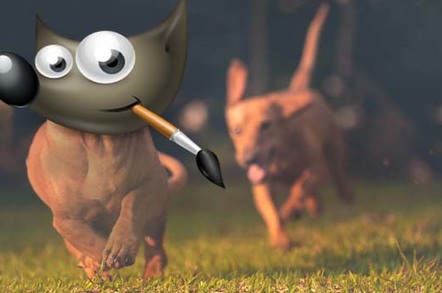 There appears to be no rest for Wilber as the GIMP team has updated the venerable image editor to version 2.10.6.

We were delighted to see the arrival of the Straighten button in version 2.10.4, mainly due to our inability to hold a camera straight. Version 2.10.6 extends this handy feature to include vertical straightening, so the Leaning Tower of Pisa need lean no more. As before, the user must wield the Measure tool and either let GIMP automatically work out if straightening should be vertical or horizontal, or override the application.

In a nod to East Asian writing systems, or just to those who feel the need for vertical text, GIMP has also gained a variety of vertical text options, including mixed orientation or the more Western style upright.

Filters get some love as well, with "Long Shadow" giving users the ability to create, among other things, titles that would not look out of place in the 1980s. A "Little Planet" filter also makes an appearance to turn 360 x 180 degree images into, er, little planets. Users can tweak the pan, tilt, spin and zoom of their planets to their heart's content.

The final notable enhancement, and one that will bring joy to the majority of serious GIMP users, is the asynchronous drawing of layer previews. Previously GIMP struggled when scrolling the layers list in a complex project due to it waiting until layer previews were complete before dealing with the user interface. Making things asynchronous improves the experience dramatically, although sadly layer groups are not yet supported.

Windows and GNU/Linux versions can be grabbed now. OSX remains firmly wedded to the 2.10.4 code base for now, but should see an update before long. ®

Our 'X-ray specs' software can be misused? And everyone wants it? Oh no, who'd have thought, say creators

In which case, you're sh!t out of luck because it's not supported