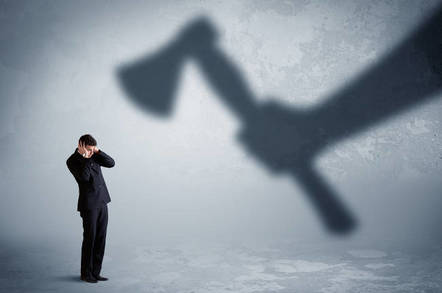 Microsoft gave the still-twitching corpse of Windows Phone another kick yesterday as it confirmed plans to stop app updates from July 2019.

The former mobile OS slinger said that anyone determined enough to add a new app for Windows Phone 8.x to the Microsoft Store would be out of luck from 31 October 2018.

From 1 July 2019, the kindly Windows vendor will stop sending out app updates to the unfortunate devices, effectively killing off the platform.

Enterprising Halloween retailers therefore have a narrow window of opportunity for selling affected users an effigy of Satya Nadella clutching a giant axe in order to frighten the dwindling cadre of Windows Phone fans.

Windows 10 Mobile will live on for a bit longer, and Windows Phone 8.x developers are urged to take a look at the Universal Windows Platform (UWP) as a means to send their apps out into the wonderful world of Windows 10.

To be fair, Windows Phone users have had plenty of warning.

Microsoft pulled the plug on OS updates back in 2017 so a sanitisation of the store should come as no surprise to those still clinging to their devices. According to NetMarketShare.com, Windows Phone 8 and 8.1 devices account for a scarcely measurable 0.02 per cent of the mobile market. Quite some way from the mighty 0.12 per cent claimed by Windows 10 Mobile.

Halloween 2018 also brings the end of new app submissions for the desktop version of Windows 8 and 8.1, although Microsoft will continue allowing updates for that platform until 1 July 2023.

Affected users are pointed at Windows 10, obviously. This may be problematic for mobile device owners since not all Windows 8 and 8.1 devices were deemed worthy of an upgrade by Redmond. ®