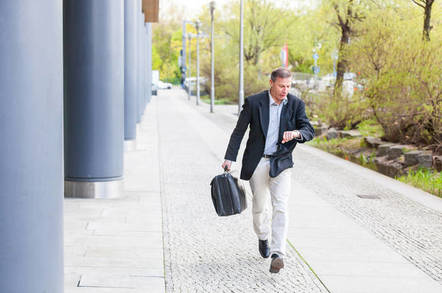 After some engineering soul searching, Dell EMC has finally arrived late to the composable system market with a box comprised of OME-M software and an MX7000 chassis for servers, storage and networking.

This long-awaited tech joins HPE's pioneering Synergy – mooted in late 2015 – along with competing systems from DriveScale, Liqid and Western Digital.

All these suppliers think customers prefer to provision or compose resource pools of compute, storage and networking as needed, rather than buying separate islands of kit for different groups of applications that can result in under-utilised resources and/or stranded components.

The MX7000 is part of Dell EMC's Kinetic infrastructure, and is a 7U chassis with eight bays for vertically mounted server or storage sleds. Up to 20 chassis can be managed by OpenManage Enterprise Modular Edition (OME-M) software.

OpenManage Enterprise (OME) can manage multiple MX7000 groups up to total of 8,000.

The MX7000 has been made adaptable for other and future compute and networking fabric technologies, such as GPUs, FPGAs, storage-class memory, Gen Z fabrics, 50GbitE and in-chassis 100GbitE, etc, by having no mid-plane.

Instead the compact servers connect directly to IO modules. That means networking modules can be updated independently of server sleds and vice versa. 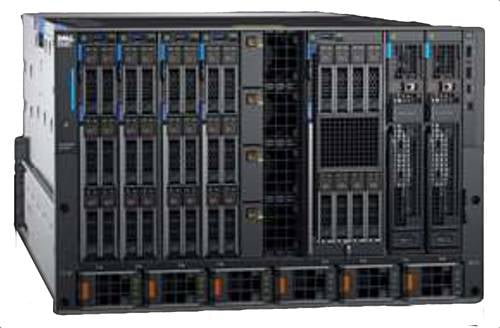 There is a 25GbitE fabric connecting server sleds within a chassis and 100GbitE uplinks to other chassis or the data centre networking fabric.

External shared storage arrays can connect to an MX700 across a 32Gbit/s Fibre Channel network; the third IO fabric. They can also connect via Ethernet.

An MX7000 can be populated with server and/or storage sleds:

Storage sled drives can be assigned to any server in a sled. Directly attached drives in a server sled are local to that sled and cannot be shared. 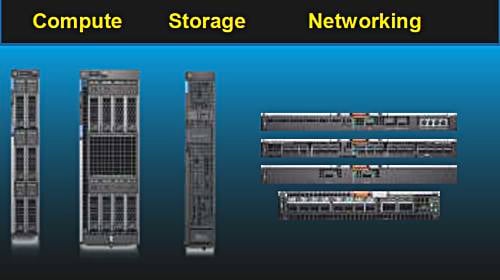 Switch modules are mounted horizontally in the chassis and there are four available:

OME-M is a member of Dell EMC's OME product family. It runs inside the MX7000 chassis, on a pair of embedded servers for high availability, separate from the compute sleds and not using any of their capacity.

It manages all the nodes, with up to 160 servers across 20 MX chassis, and provides profile-based deployment of compute and storage (at drive level). Admin staff can associate a profile with a slot or server. MX7000 chassis can be automatically discovered.

OME-M, like OME, has a RESTful API, which helps automate multiple tasks and integration with third-party tools. Admins can manage servers remotely with the OpenManage Mobile application.

Composable is based on the idea that server systems can be disaggregated and their compute and storage resources shared between applications to avoid under-utilisation. However, the same logic can be applied to disaggregation within the servers themselves; of memory and different types of compute resource.

Using a control plane, each of these items can be treated as a reusable resource and dynamically assigned in total or in part to applications, and revert back to the pool when no longer needed.

To do that a systems fabric is needed to set up a composed system and enable the elements to interoperate. Different suppliers such as HPE, DriveScale, Liqid and Western Digital (OpenFlex) each have their own composable systems tech for control plane implementation and have made fabric choices.

Synergy is probably the composable infrastructure market leader, with around 100 customers who have ordered several thousand modules. The system features a dedicated in-chassis Composer HW/SW module which controls the 10U chassis of composable elements via a Virtual Connect fabric. Chassis can be added in a scale-out manner

DriveScale has a composable server and disk drive storage infrastructure, with Western Digital NVMe SSD support added (the Ultrastar Serv24-HA.) The DriveScale SW can provision flash capacity down to a "slice of a drive" level. The system aims to provide equivalent composability to that which hyperscalar users enjoy and DriveScale has expressed support for WD's OpenFlex technology.

Liqid has a composable Grid PCIe structure that allows GPUs to be composed as well as CPUs, storage and networking.

Western Digital's OpenFlex has SSD or disk drive chassis linked to servers via an NVMe-oF interconnect, with the HW and SW management being via the KingFish API. This is supported by a set of ecosystem partners, which includes Supermicro, Inspur, DriveScale and Kaminario.

Dell EMC's MX7000 composability scheme is based on its existing server, storage, networking, and management software technology bases, integrated in a chassis that allows for the use of future networking technologies, like Gen Z, and for further server disaggregation into CPUs, GPUs, FPGAs and storage-class memory.

That makes it quite easy for its customer base and channel to adopt, with no initial jump to a PCIe architecture, NVMe fabric or the use of GPUs and/or FPGAs.