Python wriggles onward without its head 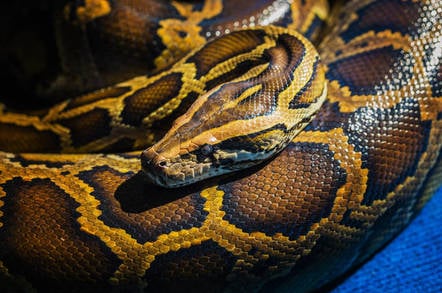 Analysis At the third annual PyBay Conference in San Francisco over the weekend, Python aficionados gathered to learn new tricks and touch base with old friends.

Only a month earlier, Python creator Guido van Rossum said he would step down as BDFL – benevolent dictator for life – following a draining debate over the addition of a new way to assign variables within an expression (PEP 572).

But if any bitterness about the proposal politics lingered, it wasn't evident among attendees.

"It has not changed the tenor of development yet," he said. "Essentially, [Guido] presented us with a challenge for self-government. And at this point we don't have any active challenges or something controversial to resolve."

Simeon Franklin, a technical instructor at Twitter and Python teacher, told The Register as much. "Python is run by 30 or 40 people these days," he said. "Nothing is really changing that much."

That said, he said he hopes an official transition plan gets published, if only to quell questions that arise in the absence of clear communication from the stewards of the language.

Hettiner said there's a core developer sprint coming up and the group will need behave more responsibly without van Rossum as an arbiter.

"It's time for the kids to grow up a little bit and become more mature," he said. "In the past, we could generate relatively crazy out-of-the-box ideas, knowing that if something was too over the top, there was an adult in the room, Guido, to say, 'No, we're not doing that.'"

According to Hettinger, the rate of code check-ins and bug fixes following van Rossum's retreat has been essentially the same as it was before he left. That sort of activity runs itself, he said. Where leadership will be required is if a large group of people want to take the language in a different direction than the rest of the Python community.

Guido's role historically was to make such decisions, Hettinger said.

But Hettinger believes examples of good governance in various Python projects, like Django and Project Jupyter, provide the core language developers with a way forward.

Python is one of the most popular programming languages at the moment, thanks in part to its utility for data science and machine learning, about which the public cloud platforms cannot stop talking.

Hettinger, however doesn't see the AI craze as the reason for Python's ascendency. Rather attributes Python's popularity to its success as a clean base language for grafting on other tools, such as the frameworks used in disciplines like AI and machine learning.

"This core language supports everything from numerics to genomics," he said. "We get almost nothing with regard to requests for AL or ML. It's done outside the core."

Franklin concurred. "Python seems to be the common language for machine learning," he said. "What's been interesting is that hasn't really driven the language itself to change that much. The thing that makes it compelling for machine learning is how easy it is to use right now."

AI played a prominent role at PyBay. A significant portion of the programming books offered for sale had to do with AI, machine learning, deep learning or the like. The theme extended to presentations, a number of which touched on AI ethics, understanding how machine learning algorithms arrive at decisions, and the application of AI-oriented tools.

A Cisco representative orbiting a display table set up outside the main auditorium explained the networking firm's presence at the show. It had a lot to do with AI: Cisco, the fellow effused, has access to loads of data through its network hardware and an interest in making use of it.

The company gets 30,000 bug submissions a year, he said. To help makes sense of such data, Cisco has its eye on AI and Python. For example, its coders created an in-house Python-based network automation development kit called CafyKit. It provides a way to apply machine learning to network data.

Meanwhile, mobile-oriented talks were scarce, apart from a few that focused on the development of backend chatbot services for mobile chat clients.

"Mobile is the single largest ecosystem that we're not in at all," said Franklin.