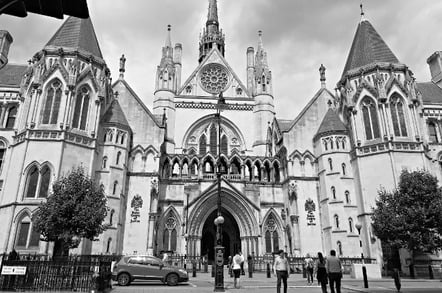 The directors of the company at the heart of the ZX Spectrum reboot scandal have been ordered to pay yet more legal costs as they keep trying to kick their financial woes into the long grass.

At a hearing in London’s Royal Courts of Justice earlier today, David Levy, Suzanne Martin, Janko Mrsic-Flogel and Retro Computers Ltd (RCL) succeeded in having an oral hearing to assess earlier legal costs delayed until mid-September – but were ordered to pay £900 to cover the costs of today’s legal wranglings.

Claiming legal costs against RCL and its directors are former directors (and current shareholders) Paul Andrews and Chris Smith. The two sides are arguing over who should pay the lawyers’ bills from a High Court case heard last year brought by Andrews and Smith to stop RCL stripping them of their shares. RCL has repeatedly sought to delay anything that might be a step towards a final costs judgment, with today seeing a repeat of the same behaviour. Approximately £35,000 is now at stake.

Hearings in the Senior Court Costs Office, itself a court, are not like other court hearings. They take place when two (or more) sides in a High Court case can’t agree on legal costs. Both sides’ lawyers prepare detailed breakdowns of how money was spent during a previous court case (for example, preparing documents, replying to letters, etc) and a costs judge then rules what must be paid and who must pay it.

Costs proceedings are supposed to be finished within three months of the main case. RCL's case has taken more than a year, achieving legal time extension after time extension.

RCL took £513,000 in crowdfunded Indiegogo cash a couple of years ago from nearly 4,500 members of the public. This, according to RCL’s marketing materials of the time, was to be spent on putting the ZX Spectrum-themed device into production.

After two years with no production and emptying its bank account, RCL emitted a handful of consoles and then went to ground, shutting down its social media presences and ignoring The Register’s invitations to explain itself.

As he tried to convince the judge to set the next hearing date as far into the future as he could, RCL chairman David Levy, wearing a pale jacket and an open-necked shirt, complained to the judge: “We have to get hold of various documents… this is one of the problems, [Andrews and Smith] sent us some documents during this whole horrible dispute but we haven’t got everything.”

Chief Master Marsh, presiding at today’s hearing and the most senior judge of the Senior Court Costs Office, told RCL’s directors: “I appreciate life wasn’t straightforward for you. Nonetheless, we are over a year from when we should have done this. The claimants are entitled to require you to get on with it so really it’s just a question of you getting on with it.”

Undeterred, Levy continued: “May I ask the question, if our solicitors are unable or unwilling for any reason to provide the documents, are we entitled to seek those documents from the other side and are they?”

Chief Master Marsh, smiling patiently but firmly, interrupted Levy: “They’re not obliged to provide them. The obligation is on you to obtain the documents from your solicitors. If you have difficulties you can apply back to the court for an extension of time. That’s not going to be looked on with great sympathy.”

Some days before the hearing, RCL’s solicitors, Michelmores LLP, told the court they were no longer acting for the scandal-hit company. All its directors were present in person to defend themselves.

Janko Mrsic-Flogel, RCL’s CTO, piped up towards the end of the hearing to ask the master why the directors were individually liable for costs from the High Court case. Chief Master Marsh replied: “Those proceedings have effectively finished. We’re now dealing with costs, everybody entitled with costs needs to be a party, or be obliged to pay costs. You all need to be parties for the purposes of paying costs in proceedings.”

When Mrsic-Flogel asked if there was “a way to get the personal names removed” the judge said “I very much doubt it.”

The master also asked Levy in passing whether RCL was still in existence, to which its chairman replied: “Yes.”

Chief Master Marsh ordered at the end of the hearing that unless RCL, Levy, Martin and Mrsic-Flogel filed requests for provisional costs assessments by 4pm on 14 September, “the costs to which they would otherwise be entitled… shall be disallowed.” The costs bill before this hearing was just over £34,000, with today's costs order of £900 being added to that.

Lee Fogarty, a former RCL contractor who has since entered his own legal dispute with it over allegedly unpaid money, was dropped from today's costs order at Andrews and Smith’s barrister’s request. It was said that he only became aware that he was named in the proceedings very recently and that he first contacted the Senior Court Costs Office about it on 8 August.

This means September will see more legal wranglings over RCL. Whatever happens next, it definitely won’t involve the delivery of more ZX Spectrum Vega+ consoles because a fed-up Sky has withdrawn the right for RCL to use the ZX Spectrum brand. ®

Two RCL customers have recently secured county court judgments against the firm, with one confirming to The Register that he has secured a warrant to enforce it, the full value being £277 including costs.