Now you can tell someone to literally go f--k themselves over the internet: Remote-control mock-cock patent dies

Talk about getting off on a technicality... 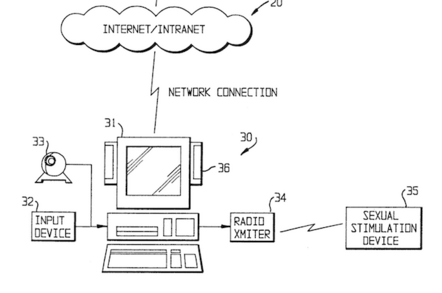 Putting the sexy in schematic ... Main thrust to the patented design

It is a great day for those who dream of Internet-of-Flings sex toys. A key patent describing web-connected remote-controllable techno-dildos has expired.

Friday marks the 20-year anniversary, and, ahem, climax of, US Patent 6,368,268, a controversial piece of intellectual property that has long been blamed for holding back the development of 'net-connected pleasure gizmos.

Bestowed with the decidedly non-stimulating title "Method and device for interactive virtual control of sexual aids using digital computer networks," the '268 patent generally described a system where a personal joy-stick is connected to a computer that, in turn, links up to the internet.

"An interactive virtual sexual stimulation system has one or more user interfaces. Each user interface generally comprises a computer having an input device, video camera, and transmitter," the patent's abstract read.

Basically, patent-holding firms had been using the '268 patent to shut down or extract a licensing deal from anyone who wanted to make IoF sex toys that could be cum-trolled over the internet. This kept a number of startups and hobbyists from getting into the game with their own network-connected loin ticklers.

The patent was issued on August 17, 1998 to Warren Sandvick, Jim Hughes, and David Atkinson, but most recently was owned by Tzu Tehcnologies, a patent-litigation firm that had used the patent as a legal sword (a bulbous, vibrating, ribbed-for-her-pleasure sword, presumably) to extract licensing payments from companies looking to develop their own connected package-pleasers.

"This patent has embroiled many SexTech companies in patent infringement lawsuits, stopping them in their tracks as they attempted to create high tech pleasure devices," explained industry site SexTechLaw.

"For those who couldn’t pay licensing fees, there would be no pleasure – The suits were the end of the road, pushing them out of business."

While the end of the '268 patent clears one major hurdle for smaller sex-toy companies to link up their creations with the cloud, it won't be the end of all legal problems in the industry.

Metafetish, a blog that tracks the world of tech-friendly sex toys, pointed out that a number of other frivolous patents await those who want to get into the internet of buttplugs.

"If you think the end of the 268 patent is the beginning of a sex tech revolution, you're gonna have a Real Bad Time once you find out about all of the provisional patents filed throughout the last few years," the site noted.

"Modern sex tech companies have set up an environment of mutually assured legal destruction while making damn sure no new players will rise just because as of 2018/08/17 you can UDP some vibrations to someone somewhere else and not have to pay a license for it in the US."

Sadly, it seems the mock-cock minefield is still fraught with danger. So, don't suffer any premature celebrations. ®