TCP slower but not by much and enables Ethernet use 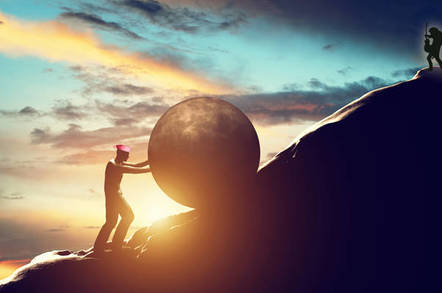 NVMe over TCP is easier than pushing RoCE uphill

The biz is an NVMe-over-Fabrics (NVMe-oF) flash array pioneer and is already supporting simultaneous RoCE and TCP NVMe-oF transports.

Head of Products Jeff Sosa told El Reg: “We are … supporting NVMe-over-TCP. The NVMe-over-TCP standard is ready to be ratified any time now, and is expected to be before the end of the year.

“We actually have a customer who is deploying both NVMe-oF with RoCE and TCP from one of our arrays simultaneously.”

Pavilion says NVMe-oF provides the performance of DAS, with the operational benefits of SAN. Its implementation has full HA and no single point of failure and says it offloads host processing with centralised data management.

That data management, when used for MongoDB for example, allows; 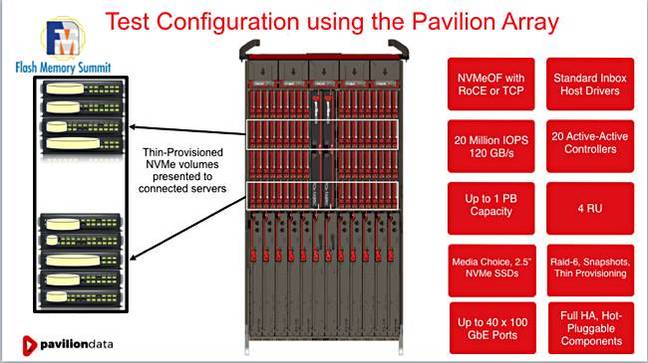 Pavilion compared NVMe-oF performance over RoCE and TCP with from one to 20 client accessors, and found average TCP latency was 183µs and RoCE’s 107µs, TCP being 71 per cent slower.

A Pavilion customer NVMe-oF TCP deployment was data centre rather than rack scale with up to six switch-hops between clients and storage. It was focused on random write-latency serving 1,000s of 10GbitE non-RDMA (NVMe-oF over TCP) clients and a few dozen 25GbitE RDMA (NVME-oF with RoCE) clients.

The equipment included Mellanox QSA28 adapters enabling 10/25GbitE breakouts with optical fibre. There were 4xswitch ports consumed to connect 16xArray/Target ports physically cabled. Eight ports were dedicated to RDMA and 8 dedicated to NVMeTCP; both options equally "on the menu.”

There were no speed-transitions between the storage array and 10GbitE or 25GbitE clients with a reduced risk of over-whelming port-buffers.

Early results put NVMeTCP (~200µs) at twice that of RoCEv2 (~100µs) but half that of NVMe-backed iSCSI (~400µs). On-going experimentation and tuning is pushing these numbers, including iSCSI, lower.

Suppliers supporting NVMe-oF using TCP as well as Pavilion include Lightbits, Solarflare and Toshiba (Kumoscale.) Will we see other NVMe-oF startups and mainstream storage array suppliers supporting TCP as an NVMe-oF transport? There are no signs yet but it would seem an easy enough (relatively) technology to adopt.

El Reg wonders how FC and TCP compare as transports for NVMe-oF over. If any supplier knows please do get in touch. ®