Boffins get fish drunk to prove what any bouncer already knows 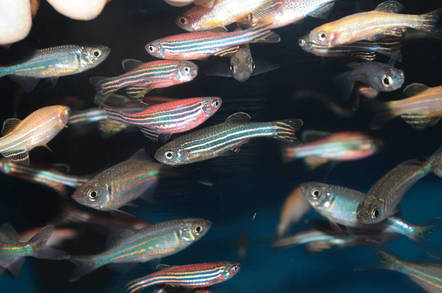 Can fish get drunk? Yes, apparently.

They’re more likely to become anti-social daredevils when the alcohol is mixed with energy drinks, according to a paper published in the Journal of Psychiatric Research.

A team of researchers discovered this when conducting experiments with zebrafish. They doped up a group of 192 zebrafish by adding different concentrations of alcohol and energy drinks containing taurine in a tank of water.

The animals were split into shoals with four fish per shoal, and their behaviour was monitored over a period of an hour. The tank was also split into four different areas, the furthest end contained a fake model of an Oscar fish, a natural predator of zebrafish.

“Alcohol reduces our inhibitions, and in low doses can cause relaxation and euphoria. However, in higher doses this low inhibition can cause problems with fighting or risky behaviour. Zebrafish have similar biological and behavioural responses to alcohol, and are a highly social species, making them ideal for studying the effects of alcohol on behaviour,” Parker

Wasted worker wasps wanna know – oi! – who are you looking at?

The results showed that zebrafish that were exposed to more taurine and alcohol were less likely to interact with its mates in the tank and more likely to venture off towards the predator zone, compared to fish that just had alcohol or only water in their tanks.

“Here, we found that the addition of taurine, an ingredient in many 'energy' drinks, appears to exacerbate risky choices in zebrafish, as well as reducing their social cohesion. Taken together, these data appear to suggest that mixing alcohol and taurine might be a factor in increasing some of the negative effects of alcohol. People should be aware that drinking energy drinks in combination with alcohol may impair their judgement, and should do so with caution," he warned.

We’ve all had our own experiences downing vodka redbulls, rum and cokes, and the god awful Jägerbombs at university, and sworn that they get us drunk faster. It turns out that adding caffeinated sugary fizz to alcohol makes the effects of binge drinking even worse.

"The effects of mixing alcohol and energy drinks is yet to be established. This study is the first to show that the two together may be exacerbating some of the negative effects of binge drinking; that is reduction of fear and problems in social communication while intoxicated, which collectively increase the risk of fighting, violence and participation in risky behaviours," said Matthew Parker, co-author of the paper and a senior lecturer in behavioural pharmacology and molecular neuroscience at the University of Portsmouth. ®