Wondering what to do with that $2,300 burning a hole in your pocket?

Why not waste it on some not-very-good Magic Leap techno-goggles? 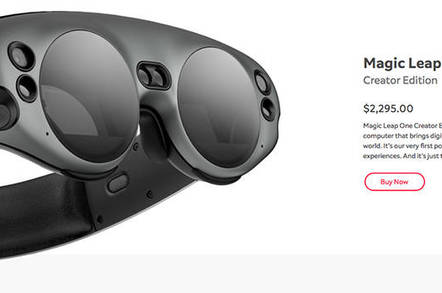 The day has finally arrived! After years of delays and endless over-hyping, Magic Leap has launched its augmented-reality goggles.

But is it any good?

In the lead-up to today's launch, Magic Leap gave select people yet-another tightly controlled demo of the gear, and they have been unanimously underwhelmed. Which is quite something given the extraordinary willingness of tech journalists to effusively wax lyrical about any new technology just because it's new.

"My initial experience didn't blow me away, despite Magic Leap's promises," admits CNet. "It's not the kind of revolutionary (or downright magical) advance that Magic Leap has teased for years," warns The Verge.

The Wall Street Journal's reviewer tried her absolute best to like it, but was obliged to confess that she "found Magic Leap’s technically impressive demos to be little more than a novelty." MIT Technology Review concurs: "While the experiences in the demo room are fun and visually impressive, none of it is truly mind-blowing." Both agree the product is "nowhere near ready for the masses."

The Verge wonders why there isn’t more: "I’m not sure what its internal studios and partners have been doing with several years with virtually unlimited funding."

If you consider that the upstart has had hundreds of millions of dollars, and years to prepare for this unveiling, and that journalists were flown to a special room in Magic Leap's headquarters in Florida – which the biz will have mapped in intricate detail in advance for its gizmo – this is all a resounding thumbs down.

MIT Tech Review even managed to crash the device: "Magic Leap's Create app lets users drag and drop digital 3D characters in the real world. At that point, an error message pops up in my field of view. Apparently the headset can’t support any more creations, and I have to delete mine before making more."

Critically though – as we have repeatedly noted – the hardware cannot handle the most critical component of its entire experience: people moving around.

"While the visuals tend to look sharp and stay still, when I swiftly shake my head, they sometimes split into red, green, and blue bits as I move around," warns MIT Tech Review.

"Some objects appeared cut off unless I turned my head or took a few steps back," notes the WSJ. The Verge spotted the same: "Tracking was generally good, but objects occasionally shifted or jittered. A few times, animated objects seized up altogether, which might have been an issue with tracking, Lightpack performance, or something else."

It's actually "something else," and it's called "inside-out tracking" by the hardware maker. Magic Leap is unable to reliably cope with movement of the headset, particularly when it comes to correlating the orientation of the gadget with the movement of virtual objects in view.

While its entire premise is that you can wear the wireless headset anywhere, and its system will recognize your environment in real-time using only sensors on the device – rather than external motion detectors – it is an extremely difficult thing to achieve.

The system tries to provide a smooth experience as you move around, but there is a lag in the actual movement detected by the headset sensors and the rendering of images you see while wearing the headset. Sooner or later, if you move too much in one direction, the hardware has to catch up – and you experience that as a jump in position of objects in the room.

With Magic Leap's headset, you see through the glass in the device, with graphics laid over your view, and so any discrepancies are all the more obvious and disorientating. Inside-out tracking also gets harder the further away something is – which is why in all the demos that the reviewers talk about, all the objects are close to them and the further away they are, the bigger they are.

But don't worry, promises Magic Leap: it will all come good soon.

On the image jumpiness, one reviewer reported that Magic Leap CEO Rony Abovitz – who was in the room with them – "says this will be improved in Magic Leap Two." When The Verge noted the same thing: "Sam Miller, one of the founders and leader of the systems engineering team, tells me this is an issue of 'tuning' the different pieces of hardware and software that work together."

Well, yes it is, if you want to give the word "tuning" the largest possible interpretation you can imagine.

What all the reviewers really want to say, but don't feel they can, is that Magic Leap's massively over-hyped, long-delayed, hugely expensive headset just isn't any good.

But instead we'll have to settle for "slightly better than Hololens" – Microsoft's nerd spectacles that came out more than two years ago. Essentially, once Magic Leap's glasses are improved, and made smaller and cheaper, and have a larger field of view, and work outside a single specially mapped room, well, then they might be good.

"Magic Leap feels… like… a stepping-stone more than a revolution," says CNet. "We shouldn't count the crazy Florida startup out," is the WSJ's faint praise.

The truth is that Magic Leap continues to be unable to pull off the actual magic leap it needs – actual inside-out tracking with a field of view that gives you a sense of being in a room rather than looking down a pair of binoculars. Anything else is simply not going to cut it.

And pretty much the only thing going for the upstart right now is that Abovitz's passion and visions of just-out-of-reach computing magic has persuaded a huge number of talented engineers and content makers to work for the company. But if the money runs out, so will those people – right into the arms of other tech and gaming outfits.

Having being forced for perhaps the first time to confront the honest views of someone not on his payroll, CEO Abovitz appears to have had somewhat of a reality check. He admits to MIT Tech Review that "expectations for what he’s building have spiraled out of control."

He tells The Verge he wants to "reset some of the hype" – hype, which, incidentally, he has been entirely responsible for and, in fact, appears to have manufactured in order to bring in new investors. "It's all extremes, and I just feel like, 'Hey, let's all come back to the center, let's take a breath," he tells the reviewer.

But don't worry, before long, the showman is back at it. He literally shows a reviewer a table with a cloth over something, and tells them that underneath are the second and third iterations of the headset – which he is only showing to investors.

And he has a new line to explain why the Magic Leap One is such a damp squib: it's his Apple I: the proof-of-concept device built by Steve Wozniak that in turn led to the Apple II, Steve Jobs, and tech history.

You have to hand it to him, Abovitz knows how to press the right tech hype buttons. Just a shame his billion-dollar headset is shit. ®