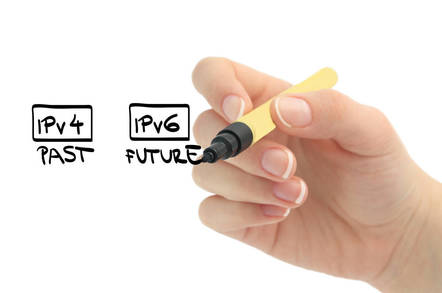 It has been twenty or so years since the publication of the first drafts of the IPv6 standard, in response to the growing realisation that the IPv4 address space would sooner or later be entirely filled.

Fast-forward to today, and amazingly the world is clinging stubbornly to IPv4, with the rate of adoption of IPv6 possibly slowing.

When IPv4 was under development during the 1970s, it must have seemed reasonable to specify 32-bit source and destination fields that dictate approximately 4.3 billion possible addresses. After all, the entire internet at the time comprised a relatively small population of government and academic sites. Then came the World Wide Web in the 1990s, and global subscriber numbers went stratospheric.

IPv6 was supposed to fix this, as well as other issues. With 128-bit addressing, it allows for approximately 3.4×1038 unique addresses, although not all are available. It also simplifies the packet header structure, moving rarely used fields in the IPv4 header into optional header extensions, enabling packet forwarding in routers to become more efficient.

Other advantages of IPv6 are said to be support for multicast transmissions, allowing bandwidth-intensive traffic like multimedia streams to be sent to multiple destinations simultaneously rather than as multiple individual connections, thus saving on network bandwidth.

Yet for a decade or more following the IPv6 draft standard, there was little in the way of adoption. Arguably, it was a classic chicken-and-egg: internet users had little reason to migrate because all the websites and other services they accessed were on IPv4, while providers had little incentive to invest until there was demand from users for them.

Things have changed. On the official World IPv6 Launch day in 2012, IPv6 accounted for less than 1 per cent of global internet traffic. Today that figure is approaching 25 per cent, according to Google, but the rate of uptake appears to have plateaued recently.

One of the major reasons is the widespread use of network address translation (NAT). This allows organisations with thousands of connected systems to hide behind a relatively small number of public-facing IP addresses by operating private IP addressing schemes on their internal network.

Some ISPs and telecoms are helping slow things down further by using the same approach with Carrier Grade NAT (CGNAT) that extends NAT techniques for larger scale. This often involves each customer's gateway or customer premises equipment (CPE) being allocated a private IP address, with each customer operating a private IP address scheme behind the CPE. In this way, multiple customers can be hidden behind a small number of public-facing IP addresses.

NAT is not without problems. Some application protocols attempt to make reverse connections to different ports, for example, and peer-to-peer protocols, such as those for IP telephony, will not operate because private IP addresses are not routable over the public internet, and therefore a node outside the network cannot initiate contact.

But there are workarounds and, despite such downsides, NAT has been so successful at mitigating the IPv4 address problem that many see little reason to shift to IPv6 unless there is a pressing need – such as they are growing so fast they risk consuming all their allocated IP address space.

The reluctance to sanction a move to IPv6 is understandable when you consider the element of risk associated with such infrastructure projects. In this case, IPv6 may break one or more applications with unpredictable consequences. Further, migrations will be time consuming and costly, with the cost and effort yielding little in terms of tangible benefit to a company in terms of new revenue won or extra profit.

Moving involves the need to upgrade name services to support IPv6 addresses, such as a DNS server that supports AAAA records, and make sure they have a full inventory of their network to identify any kit that cannot support IPv6 and may need to be replaced. Those who wish to undertake a phased migration must straddle both horses, upgrading the hosts and routers on their network to support dual stack capability and run both IPv6 and IPv4 simultaneously.

Ironically, IPv6 may be exacerbating the problem of slow uptake – it may be those who have moved to IPv6 who are contributing to the slowdown. These organisations will no longer have great need for their IPv4 address allocation so are free to sell them to others out there who are running short.

This possibly could explain why there has been no visible crisis, despite the fact that it was widely reported in early 2018 that the world had finally run out of unallocated blocks of IPv4 addresses.

So is IPv6 destined to be permanently stuck in the slow lane? Will we ever approach a tipping point, where it's finally in the majority and use of IPv4 begins an irreversible decline?

One factor that may impel IPv6 forward is organisations simply bowing to the inevitable – business chiefs and IT planners accept IPv6 is such in the long term.

Another factor driving it over the tipping point could be the development of large-scale Internet of Things (IoT) deployments, which could lead to millions or even billions of connected devices, many times more than could easily be accommodated using IPv4. Gartner expects 20.4 billion connected "things" to more than double by 2020. That includes things previously outside the purview of IT professionals, such as TVs, fridges and security cameras. IPv6 provides for approximately 340 undecillion IP addresses compared to IPv4's more than four billion.

Then there is that slow drift to IPv6. Remember the chicken-and-egg conundrum that held up IPv6 in those early days? Well, as IPv6 takes hold more websites and online services will begin to only be available via IPv6. That will make accessing these services difficult for users. This pull will drag more IPv4 holdouts along with it.

Everyone agrees IPv6 is inevitable, the problem is that "inevitable" is starting to look a longer way off than expected. Inevitable looks like becoming a long, drawn-out process as there continues to be no compelling reason for internet users to make the switch.

That tipping point will come at such a time as there is a critical mass of users operating primarily by IPv6, or the compromises of schemes such as NAT begin to impose too much of a latency hit.

When that point takes place, however, remains anybody's guess. ®