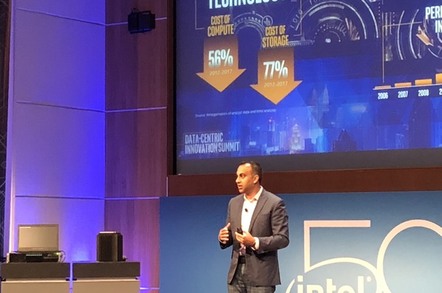 At Intel's Data-Centric Innovation Summit today in Santa Clara, California, Chipzilla reiterated its commitment to deliver 10nm Xeon processors in 2020, to maintain its market leadership, and to adapt its silicon to AI-oriented workloads.

That'll be the same 10nm that's years and years late, with manufacturing nightmares hampering the rollout of initial 10nm parts. Desktop processors using the long-awaited process node are due to arrive in volume in 2019, and now Xeon server CPUs the following year – fingers crossed.

Over the past few hours, Intel's execs have attempted to paint a rosy picture without once mentioning their resurgent rival, AMD. They insisted Chipzilla is broadening its portfolio beyond the processor market. In theory, that would make its chip lithography woes less relevant.

Invited on stage, Bart Sano, platforms veep at Google, expressed appreciation for Intel's long partnership and eagerness to try out the new kit. "I can't wait to get this into the data center to torture it," said Sano.

"And we can't wait for the first checks," Shenoy replied.

When you're a hammer, everything's a nail; when you make processors, memory and storage, everything's data. So it was that Shenoy led off with his variant of "data is the new oil," citing self-driving cars as an example.

"The car will be the greatest data collector in the world," he said, without any hint of concern about the implications for privacy and society. "Autonomous vehicles will run on data just as today's vehicles run on gasoline."

Intel's logic here recalls a line from the 1990s comedy series Seinfeld, in which George's former boss, Mr Wilhelm, having joined a carpet-cleaning cult declares, "Most of the world is carpeted. And, one day, we will do the cleaning."

More or less everyone promoting a tech company in the past decade has said something of the sort. First, it was the cloud that would change everything; in recent years, it's been AI, because AI-related disciplines demand significant amounts of computing commodities, namely processors and storage.

In 2017, said Shenoy, Intel pocketed more than $1bn in sales from Xeon processors running AI workloads in data centers, noting this is the first time the company has disclosed this particular figure.

The second Navin of the day, VP and general manager of Intel's artificial intelligence products group Naveen Rao, declared, "AI is becoming the major workload going forward," while standing in front of a slide stating, "AI is exploding."

If you stare at the fireball, you may miss the moving of the goal posts. Where once feeds and speeds of instructions and data defined the chip business, Intel now wants to talk about how its chips handle AI number crunching. Nvidia and its efforts to make GPUs more useful for AI workloads has something to do with that. But Intel also wants to be seen through a lens not shaped by the competition.

Intel, however, couldn't completely ignore AMD and its increasingly plausible challenge to Intel's hegemony. (At lunch, financial analysts discussing the morning's presentation referred to AMD's Epyc server processor family as the elephant in the room. Intel today fills about 98 per cent of the world's data center compute market, and is a little worried it could lose as much as 10 to 20 per cent of that share to Epyc.)

Coming in 2019, there's Cooper Lake, another 14nm Xeon Scalable processor, with improved I/O, Optane DC enhancements, and a new Intel DL Boost capability – support for bfloat16 numeric data – which should help hasten the training of deep learning models. AMD's second-generation 7nm Epyc server chips, codenamed Rome, are due to arrive in volume that year, too, by the way.

A bit further out, Intel plans to deliver a 10nm Xeon Scalable processor, dubbed Ice Lake, in 2020. No meaningful details about the chip were discussed, but there's apparently a new microarchitecture.

In conjunction with its data center CPUs, Intel is trying to reduce communication bottlenecks between machines in data centers with the planned delivery of a SmartNIC (network interconnect) product line called Cascade Glacier in 2019. The hardware will be based on Intel's programmable Altera Arria 10 FPGAs. There was also mention of the company's latest NAND-based product, Intel QLC, detailed in more depth at the Flash Memory Summit happening elsewhere in Santa Clara this week.

Shenoy said Intel has revised its estimate of the total available market for its data-centric business from $160bn in 2021 to $200bn in 2022. But this is an opportunity rather than a projection or a certainty.

Toward the end of the presentation, the spectre of competition could not be ignored: a financial analyst from Deutsche Bank said there's been a lot of concern about Intel's inability to deliver 10nm chips.

"I don't talk to customers about nanometers," said Shenoy. "At the end of the day what they care about is delivered system-level performance...Our roadmap and the products we're putting forward gives us confidence we'll continue to win."

It wasn't enough. The next two questions from analysts returned to the challenges Intel has had with 10nm lithography. When there's an elephant in the room, people just get curious. ®