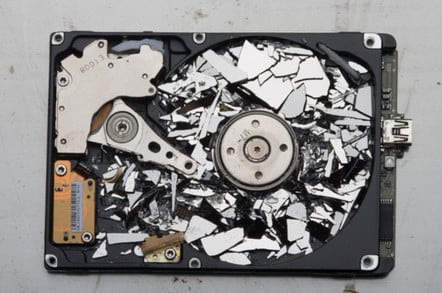 QLC is 4 bits/cell flash technology and a next step in cell bit capacity from the current TLC (3 bits/cell). Foundries belonging to Intel/Micron, SK Hynix and WD/Toshiba have started producing QLC chips and, in some cases, SSDs already. For example, Micron has a 7.68TB QLC SSD called the 5210 ION. SK Hynix has not yet confirmed any QLC technology developments.

Samsung announced a QLC SSD development earlier this month. It has followed that up by saying it is now mass-producing a 4TB QLC consumer SSD.

However, Sammy has not revealed random read and write IOPS numbers, which could mean they are nothing to boast about or that the controller is still being tuned.

There is a three-year warranty but no lifetime terabytes written rating as yet.

Samsung Electronic's Jaesoo Han, exec veep for memory sales and marketing, proclaimed: "Samsung's new 4-bit SATA SSD will herald a massive move to terabyte-SSDs for consumers. As we expand our lineup across consumer segments and to the enterprise, 4-bit terabyte-SSD products will rapidly spread throughout the entire market."

That may well be the case, but this "product" has no name, no price, no availability, and no detailed IOPS and endurance information, making the announcement possibly a tad premature.

With this QLC tech, Samsung said it will "introduce several 4-bit consumer SSDs later this year with 1TB, 2TB, and 4TB capacities" in the 2.5-inch form factor. We look forward to getting more details then.

Sammy sees itself producing a 128GB memory card for smartphones and M.2 NVMe SSDs for the enterprise later this year and should begin mass production of QLC fifth-generation (96-layer) V-NAND.

That should produce a die with more than 1Tbit capacity, implying 2019 should bring even higher capacity SSDs. The future is not bright for desktop and notebook disk drives. ®