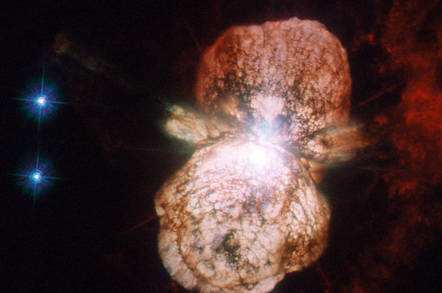 Eta Carinae is one the strangest star systems in space. When it exploded in the 19th century, it became the second brightest star in the sky. Now, scientists studying "light echoes" have found that it was also the fastest non-fatal outburst of any star system.

The blast spewed clouds of material at 10,000 to 20,000 kilometers per second - at these speeds you could reach the Moon in about 20 seconds. Some of the leftover light from the explosion bounced off of distant dust clouds and were redirected towards Earth.

These events are described as echos as they arrive later than the rays from the original explosion due to the finite speed of light, allowing the researchers to measure the speed of the explosion. The results are expected to be published in two papers in the Monthly Notices of the Royal Astronomical Society.

"A light echo is the next best thing to time travel," said Nathan Smith, an astronomy professor from the University of Arizona, who led the study.

"They give us a chance to unravel the mysteries of a rare stellar eruption that was witnessed 170 years ago, but using our modern telescopes and cameras. We can also compare that information about the event itself with the 170-year old remnant nebula that was ejected. This was a behemoth stellar explosion from a very rare monster star, the likes of which has not happened since in our Milky Way Galaxy."

The team also analysed data from the Gemini South telescope, the Blanco telescope, and the Magellan Telescope to measure the speed of the gas emitted by Eta Carinae.

"Gemini spectroscopy helped pin down the unprecedented velocities we observed in this gas, which clocked in at between about 10,000 to 20,000 kilometers per second," said Armin Rest, co-author of both papers and an assistant astronomer at the Space Telescope Science Institute.

The outburst, known as the Great Eruption, made Eta Carinae the second brightest star in the Milky Way and it was visible to the naked eye before dimming. It is a unstable star system made up of at least two stars with a combined mass over a hundred times of the Sun, and is known as a luminous blue variable - massive stars that are unpredictable and often undergo periodic outbursts.

In the Great Eruption, the star belched out as much material as ten times the mass of the Sun to form two giant dumbbell-shaped globs of gas known as the Homunculus. The researchers believe Eta Carinae used to contain three stars. One of them may have swallowed the other to become one giant behemoth star and a smaller companion star to become the system it is today.

The stars have survived the Great Eruption and are yet to explode as a supernova, Smith told The Register.

"Currently it shines brightly and has a wind, but we would not say that it is exploding. Now, we don't know when it will finally explode as a supernova, marking the ultimate death of the star - it could be soon - tomorrow, or 10 years) or it could be several thousand years." ®