Build your own NASA space rover: Here are the DIY JPL blueprints

Go on, you know you want to grab these open-source designs and lash them together 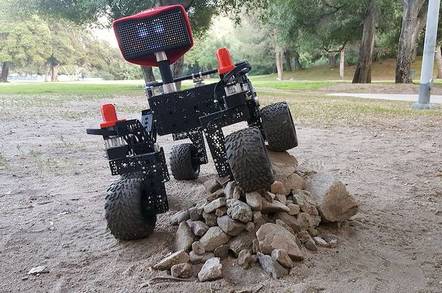 NASA's Jet Propulsion Laboratory (JPL) has been quietly working on a way to let students and interested hobbyists build a planet-exploring rover that's a scaled-down version of the American agency's six-wheeled 'droids.

For the past few months, JPL eggheads have been toiling away on the project over on GitHub, basing their work on an outreach rover, “ROV-E”, that's toured schools and museums since 2015. The boffins went public with their designs on July 31.

The one-sixth-scale Open Source Rover uses mostly off-the-shelf parts, albeit rather a lot of them since NASA's estimate for the bill of materials is about US$2,500. Here are the vital statistics:

NASA notes that builders have some wriggle-room in sticking to the design. For example, higher speed motors will allow the rover to move faster, although the lower stall torque would limit its climbing ability.

Enthusiasts will recognize the rocker-bogie suspension system, which keeps all of Curiosity Rover's six wheels in continuous contact with the ground when it's navigating obstacles. The differential pivot offloads weight from one side to the other during climbs, and its six-wheel Ackerman steering governs each wheel's direction and speed. The Raspberry Pi control system means the rover can be controlled with familiar devices – game controllers, Android apps, or DIY code.

JPL's IT chief technology officer Tom Soderstrom is the Open Source Rover project's sponsor, with data scientist Mik Cox as project manager. On this webpage, they explain that the design has headroom in both computation and the power system so builders can add their own sauce to the rover – USB cameras and solar panels, for example, or science payloads.

In that post, Cox said: “We released this rover as a base model. We hope to see the community contribute improvements and additions, and we’re really excited to see what the community will add to it.”

Most of the tools needed for the build are common enough – soldering kit, various wrenches and keys – and while a drill press, band saw, and Dremel are recommended, hand saws and drills are feasible for those with steady hands. ®