Yeah, that'll do the trick, Mark 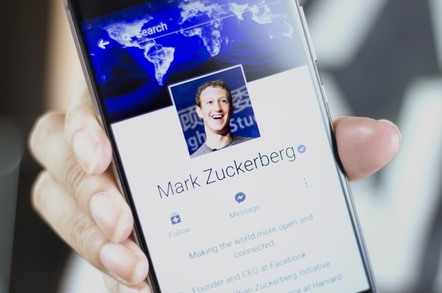 Facebook has deleted dozens of pages and accounts that were apparently coordinating to push divisive messages to the American public in the lead-up to this year's US midterm elections.

We're told 17 profiles and eight pages in all were chopped from Facebook along with seven Instagram profiles.

The social media giant said the accounts were responsible for nearly 10,000 posts and had spent $11,000 on 150 ads in the past year focused on controversial social issues such as white supremacist marches and immigration policies.

The Silicon Valley mega-bucks biz said it was not able to definitely identify who was behind the coordinated campaign, but it did note that the accounts followed the same pattern of behavior as a Russian government misinformation campaign carried out in the 2016 presidential elections – a campaign Facebook had failed to notice and initially dismissed.

Still, anyone can pretend to be a Russian on the internet, don't forget.

The size of this latest, and now shutdown, campaign is smaller than the 2016 effort – possibly because whoever was behind it was testing the waters – and Facebook noted that the perpetrators has hidden their identities by using VPNs and paying third parties to run ads.

"It's clear that whoever set up these accounts went to much greater lengths to obscure their true identities than the Russian-based Internet Research Agency (IRA) has in the past," reads a blog post by Facebook staff today. "We believe this could be partly due to changes we’ve made over the last year to make this kind of abuse much harder."

A second post by Facebook's head of cybersecurity policy, Nathaniel Gleicher, said the pages and accounts had been identified "about two weeks ago" – around the same time that Gleicher was deflecting questions about fake Facebook accounts – and gave examples of the ads and posts that had been posted by the accounts.

The kids are all white

They included an event called "No Unite the Right 2 — DC" that was intended to act as a counter-protest to a white nationalist gathering next month, and posts based around the hashtag #AbolishICE – a campaign to scrap the Immigration and Customs Enforcement agency over its controversial policy of separating children from their parents at the US border.

Just as with the previous Facebook ads bought by the Kremlin's online influencers, the goal was seemingly to divide America by pitching citizens against immigrants, left against right, white against black, and meddle with political discourse while derailing civility.

According to Gleicher, "the most followed Facebook Pages were 'Aztlan Warriors,' 'Black Elevation,' 'Mindful Being,' and 'Resisters.' The remaining Pages had between zero and 10 followers, and the Instagram accounts had zero followers."

Facebook discovered the accounts by "following up on thousands of leads, including information from law enforcement and lessons we learned from last year’s IRA investigation," it said. It gave an example of one page it identified because one of the people behind the earlier 2016 campaign had been an admin of the page for just seven minutes.

The obvious intent on Facebook's part is to give a public demonstration that it is doing everything it can to stop manipulation of its platform ahead of the November elections. It brought in the FBI to investigate the pages, and it briefed members of Congress on its findings earlier this week.

It also wrote glowingly about itself. "Security is not something that’s ever done. We face determined, well-funded adversaries who will never give up and are constantly changing tactics. It's an arms race and we need to constantly improve too," it puffed itself up in one of the three posts on the issue.

"It's why we’re investing heavily in more people and better technology to prevent bad actors misusing Facebook - as well as working much more closely with law enforcement and other tech companies to better understand the threats we face."

Having been publicly embarrassed and then excoriated for its failure to identify a massive misinformation campaign last time around, Facebook has expanded its security team, hiring several serious counterterrorism experts, and introduced new rules included the requirement for political advertisers to register with a US addresses.

It is also placing political ads into a public database (which, of course, you must login to see) and claims to be using both artificial intelligence and human reviewers to identify unusual or suspicious coordinated campaigning behavior.

Today's announcement is intended to send the message that Facebook is on top of the problem. Although, of course, we are still reliant on the social media giant's word. Given its long and extensive history of misleading information, secrecy and a refusal to provide anything that doesn't fit with a pre-decided narrative, observers should feel justified in maintaining a heavy dose of skepticism. ®