Plus: Splashes profits on dividends and share buy-backs, according to latest figures 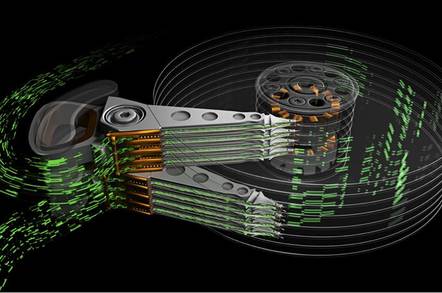 Multi-actuator drives are coming from Seagate

It's a good time to be in the enterprise drive-pushing business, judging by Seagate's solid sales and profit uptick.

Revenues grew 16 per cent, year on year, to $2.8bn in its fourth fiscal 2018 quarter – the three months to June 29. Net income for the quarter was up 304 per cent to $461m, as enterprise capacity drives were sucked up by a greedy market.

Disk drive product revenues in the quarter were $2.65bn, with $183m coming from enterprise systems, flash and other odds and sods, down from $217m in the prior quarter. That means flash and systems accounted for just 6.9 per cent of Seagate’s revenues, and, since that revenue covers enterprise systems and other stuff as well as flash, then the SSD portion will be vanishingly small.

As a result of that, the Toshiba-Western Digital joint-venture will now be supplying NAND chips to Western Digital's main competitor Seagate. There's irony for you.

The main NAND markets Seagate will be focused on will be enterprise SAS and NVMe, plus side markets in the consumer and gaming areas.

Enterprise is the future

This is a disk-centric company, and one increasingly focused on enterprise-class capacity drives. Such enterprise disk drives on their own accounted for 44 per cent of Seagate’s revenues in the quarter.

Dave Mosley, president and CEO, talked of solid execution and strong demand, saying: “We achieved our third consecutive quarter of year-over-year revenue growth and exceeded our financial performance expectations for both the June quarter and this fiscal year.

The firm also announced that 23-year Seagate veteran EVP and CFO Dave Morton would be leaving Seagate on August 3 for a senior finance executive role at another company. Mosley said, “On behalf of the board of directors and executive team at Seagate, I would like to thank Dave for his contributions over his 20+ year tenure at the company.”

It’s not known where Morton is going.  Seagate is initiating a search for a successor CFO and has named Kathryn Scolnick interim CFO. ®