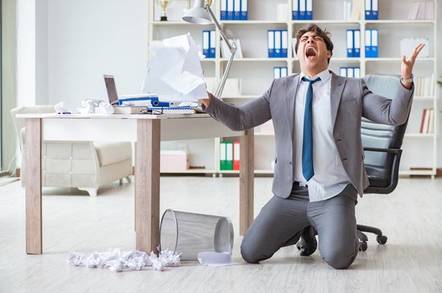 The announcement sees build 17723 lobbed onto the branch targeting release this Autumn and build 18204 giving a first taster of the delights to come to Windows 10 next spring.

Both builds (also known as RS5 and 19H1 respectively) are pretty much identical right now, but Insiders quick enough to get themselves on the Skip Ahead branch for 19H1 will see new toys aimed at 2019 before long. The other Insiders still on RS5 (including those in the Slow Ring) get the consolation prize of participation in the next bug bash, helpfully giving Microsoft a whole bunch of free testing.

Surprisingly at this late stage, Redmond has introduced a new feature with this release. The vanishingly small number of Windows Mixed Reality (MR) users finally get a use for the cameras mounted on their headsets in the form of the Mixed Reality Flashlight.

While MR headsets from the likes of Acer have had the ability to flip up the display should the user want a peek at the world around them, the new function switches on the camera to open a portal to the real world at any time via a voice command or button. So you'll be able to see the faces being pulled by those around you while still remaining immersed in a virtual world.

As well the usual round of tweaks for the Edge browser, a raft of emojis, kiosk mode tinkering and time accuracy improvements, Redmond is again trying to tackle Update Rage. The howls of users forced to stop what they are doing as Windows 10 takes a dive into the waters of Windows Update, sometimes for hours at a time, has reached the ears of the software giant and moves are afoot to deal with it.

The new plan is to use a predictive model to work out when is the best time to restart the device. The not-at-all creepy technology will try and predict if a user has simply left the machine unattended to grab a cup of tea or will be gone for the duration before hitting the update servers.

While the technology seems a little overkill for what is actually quite a simple problem, Microsoft reckons the results are "promising".

Quantum, Linux and Dynamics: That's the week at Microsoft, not a '70s prog rock band

The arrival of 19H1 signifies the end of the RS, or Redstone, naming system. It isn't the first time the name Redstone 6 has been on the chopping block. NASA astronaut Deke Slayton was to be flung on a sub-orbital Mercury flight towards the end of 1961 aboard his own Redstone 6 rocket. That mission was cancelled in favour of the then imminent Atlas orbital missions.

Slayton would go on to get his only spaceflight in the last Apollo capsule as part of the Apollo-Soyuz test project 14 years later.

The leftover Redstone 6 booster was displayed vertically at the entrance to Kennedy Space Center until 2004, when it received a comprehensive shoeing from Hurricane Francis.

Microsoft will be hoping a similar fate does not await its own Redstone 5 as the next release of Windows 10 draws nearer. ®