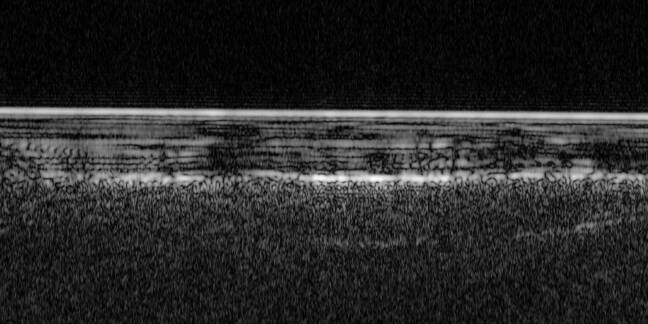 Radar image taken from one of the orbits in the south polar region of Mars. The lake is the bright layer near the centre of the image. Image credit: ESA/NASA/JPL/ASI/Univ. Rome; R. Orosei et al 2018

Scientists have discovered a lake of liquid water on Mars hidden beneath multiple layers of dust and ice, according to a paper published in Science on Wednesday.

It has long been suspected that the Red Planet is not as dry and arid as it looks. Over the years, spacecrafts and rovers have uncovered evidence of its watery past. They brought back images of streaks on its surface carved from hydrated minerals, and chemical fingerprints of clay minerals inside its rocks, and signs of water-ice at its poles.

But there has been no conclusive evidence of liquid water existing on the planet in its current state until now.

The lake stretches about 20 kilometers across and lies beneath the South Pole. It has been suspected that liquid might be found at the planet’s poles as the pressure of water-ice glaciers decreases the melting point of water hidden underneath. If the lake also contains salt deposits, the melting point is reduced even more and keeps the water flowing even at below-freezing temperatures.

Using the Mars Advanced Radar for Subsurface and Ionosphere Sounding instrument (MARSIS), radar pulses were sent below ground to inspect 200-kilometer wide patch from May 2012 to December 2015. The reflectance times of the radar pulses acts as a probe to see what types of materials are hidden beneath the surface and its overall topology.

The surface is mostly ice and dust for about 1.5 kilometers, but as the radar went deeper the scientists detected a layer that had a particularly bright reflection. They also analysed the surrounding deposits and temperature of the environment, and believe the highly reflective body is actually a pool of liquid water saturated with salty sediments.

“This subsurface anomaly on Mars has radar properties matching water or water-rich sediments,” said Roberto Orosei, lead author of the paper and principal investigator of the MARSIS experiment.

Liquid water is considered as one of the necessary ingredients for life to emerge, and finding it on Mars is promising, but scientists have yet to find any evidence that the planet is or was habitable.

“This thrilling discovery is a highlight for planetary science and will contribute to our understanding of the evolution of Mars, the history of water on our neighbour planet and its habitability. This is just one small study area; it is an exciting prospect to think there could be more of these underground pockets of water elsewhere, yet to be discovered,” said Orosei and Dmitri Titov, ESA’s Mars Express project scientist. ®