You can take off the shades, squinting Outlook.com users. It has gone dark. Very dark

Blacker than the heart of a Register hack 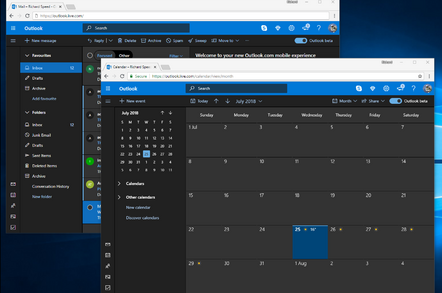 Goths of the world rejoice! Outlook.com's Dark Mode is here, turning mailboxes into blacks and shades of grey such that Lego Batman would shed a tear of joy. If Lego Batman cried. Which he doesn't.

Microsoft confirmed on Outlook's uservoice forum today that Outlook.com (the beta version of the webmail site at least) could be toggled into the much-requested Dark Mode, switching the selected theme (only the default blue theme at present) into a darker version.

Apple WWDC: There's no way iOS and macOS will fully merge as one

Dark versions of interfaces are reckoned by some to be easier on the eyes than starting at bright, white screens and have been finding their way into both Windows 10 and upcoming versions of macOS. Outlook.com gained a "Halloween"-themed look briefly in 2017 before Microsoft carried on iterating its design to get to the Dark Mode that users have today.

As for the criticism that the reading pane has also become dark, which might make some messages look a little odd, Microsoft commented:

"One of the most crucial principles we had when designing Dark Mode was to minimize the amount of eye strain that people felt. Many email clients on the web today advertise a dark mode, but we learned from interviews with others and our own usage that having the reading pane be on-light while the rest of the interface was left on-dark often made the experience worse than if the full screen were left on-light."

A mysterious "secret way" is used to recolour received messages in order to preserve the intent of the sender, and a "Turn on the lights" option in the message allows it to be shown in its original, brightly lit, glory.

The implementation isn't quite there yet; creating a new message is jarring – showing the light version of the message window regardless of Dark Mode setting and switching between functions, such as going between Mail and Calendar, sees the interface briefly flash white with the Outlook logo while Outlook.com does its stuff. Not too soothing.

Microsoft warns that the functionality may not work in all browsers and recommends users having problems switch to Edge. However, The Register had no problem trying out the site in Chrome.

With Dark Mode gradually shuffling its way into Windows 10, the Outlook.com incarnation is a pointer to a future easier on the eyes. Or an unwelcome distraction to those who don't understand what the fuss is all about. ®