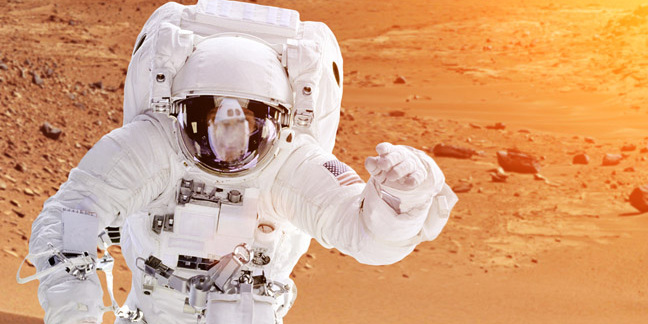 Have you ever wondered where Mars got all that striking iron-rich rust-colored dust from?

Weirdly enough, it appears it is mostly drawn from a formation on its surface called the Medusae Fossae, a single geological object that is slowly crumbling and scattering debris all over the Red Planet.

The formation stretches for about a thousand kilometres across the equator. A group of scientists analyzed data collected from NASA's Mars rovers, Spirit and Opportunity, and found that the structure is abundant with sulfur and chlorine, and its material is the best chemical match for the dust on the Martian surface.

The results of this study were published in Nature Communications on Tuesday.

"Mars wouldn't be nearly this dusty if it wasn't for this one enormous deposit that is gradually eroding over time and polluting the planet, essentially," said Kevin Lewis, co-author of the paper and an assistant professor of Earth and planetary science at the Johns Hopkins University in the US.

On Earth, outdoor dust is typically created when wind, water, glaciers, volcanoes, and meteor impacts dislodge and break up rocks. There is evidence that Mars also featured glaciers and pools of liquid water, but they probably didn’t contribute much to create its iconic red dust, the researchers reckoned.

"How does Mars make so much dust, because none of these processes are active on Mars?" said Lujendra Ojha, lead author and a postdoctoral fellow also at Johns Hopkins University. “Although these factors may have played a role in the past, something else is to blame for the large swathes of dust surrounding Mars now.”

Thus the researchers are pointing fingers at the formation as the source of all this dirt. The structure has a volcanic origin, and is estimated to have been, at one point, as big as 50 per cent of the continental United States. Now it has shrunk to about 20 per cent, as winds have eroded it over three billion years.

Scientists have spotted ridges known as yardangs sculpted by the flow of the eroding wind. They calculated how much material has worn away over time, and reckon it could coat the entire planet in a two to 12-metre-thick layer of dust. That matches the levels of dust detected on the Martian surface.

Dust is anything but boring on the Red Planet. It is one of the most dynamic geological processes on the alien world: a whopping 2.9 × 1012 kilograms of dust is exchanged between the surface and atmosphere every year.

It also controls the planet’s temperature by absorbing and scattering solar and infrared radiation. The dust whirling around in the atmosphere is also a major hindrance for spacecraft and any future human exploration. It can plaster solar panels on robots robbing them of energy, contaminate sensitive instruments, and it isn't something astronauts want to be inhaling or getting into their equipment. ®