Last century called. They want their UI back, please 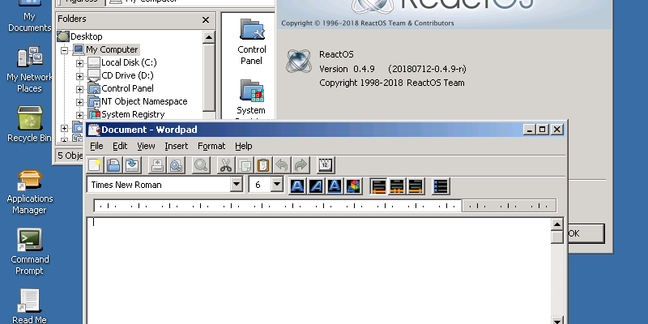 Open-source Windows wannabe ReactOS took another tentative step towards usability with a 0.4.9 release aimed at stability and self-hosting.

Tweaks in this version fix the FastFAT driver to stem resource leakages, which might hit IO performance, but makes up for it in improvements to stability. Self-hosting – the ability to build ReactOS on ReactOS – also makes an appearance.

The Windows-like shell receives a bit of polish, with in-shell opening of Zip files now supported and the Paint clone no longer crashing when users want some close-up pixel bothering. Just in time for Microsoft to deprecate the thing in Windows itself.

Originally envisaged as a reverse-engineered version of Windows 9x, capable of running Windows applications without recourse to the pesky closed source of the venerable OS, or the requirement to line the pockets of Microsoft, development kicked off in 1996. After a few stops and starts, the moniker ReactOS was adopted in 1998.

While time and Microsoft have marched on in the intervening years, ReactOS still bears more than a passing resemblance to Windows 9x or NT 4, making one of the project goals – "ReactOS looks and feels like Windows" – a tad inaccurate, unless you are still clinging resolutely to your installation CDs of yesteryear.

The ReactOS team has aimed to create a reverse-engineered NT kernel, free of Microsoft's code, which keeps step with Windows upgrades. Sort of. The latest version of ReactOS can present itself as Windows 8.1, and so should be able to take a stab at running binaries expecting to find themselves on Redmond's latest and greatest with varying degrees of success.

ReactOS is not above a bit of collaboration either, cheerfully exchanging code with the likes of the Wine team in the shared goal of running Windows binaries natively. Of course, while Wine needs an underlying Linux kernel, ReactOS has its own, specific, NT-like kernel.

Firing up a thinner, lighter Windows

The Register had a crack at firing up ReactOS in a virtual machine and we were pleasantly surprised with what we found, after playing a short game of "hunt the driver" to get the thing talking to Hyper-V's network adapter.

Once past the initial shock of last century's user interface, ReactOS does indeed work as advertised to a certain extent. Certainly, the latest version of Office is decidedly sniffy about installing, but let's face it, anyone who has gone to such lengths to avoid Redmond's wares is unlikely to be shovelling Word or Excel on to their pristine, and slurp-free, open-source installation.

Instead, once a modern browser is installed (the incarnation of Wine Internet Explorer that comes with the OS is painful to use), getting hold of a suite such as LibreOffice turns the OS into something familiar. Familiar to users who have spent the last 15 years or so in cryogenic suspension.

Which is, of course, the crux of the problem. Linux users have access to native versions of many critical Windows applications, and Wine makes a good fist at running those that cling to Microsoft's OS. If you absolutely must have that old Windows shell look and feel and are alarmed at the data slurping of the latest version of Microsoft's OS, then the alpha of ReactOS may be for you.