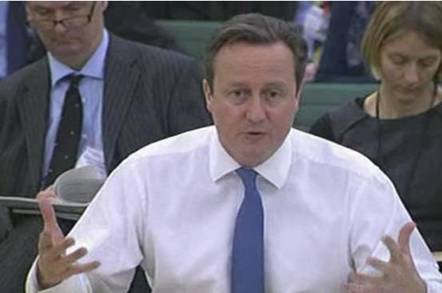 Fearless scarperer-in-chief David Cameron is all set to dispense nuggets of Brexit wisdom to Cisco's October CIO conference – making us wonder how much he's earning for the stunt.

The former prime minister of Great Britain and Northern Ireland is billed on Switchzilla's CIO Exchange conference website as giving the keynote speech.

Curious folk will note that day one of the three-day conference begins at 07:30 with golf, and that the ex-PM doesn't kick off proceedings until 5pm. Which is entirely reasonable; after all, you wouldn't want to spoil your time on the links by letting Cisco chief Chuck Robbins interrupt your perfectly perfected putting with a sales pitch.

Or, for that matter, Cisco CIO Guillermo Diaz ("known to his friends and colleagues as 'G'" – no, we're not making that up, that's genuinely how hypercool frood G-Dawg describes himself on the conference line-up page).

As for Cameron – who famously ragequit British politics altogether after committing himself to keeping the UK inside the EU, only for the vote to swing the other way in June 2016 – his potted bio runs to six full paragraphs puffing up his political achievements rather than the handful of sentences all the other speakers supplied.

Oddly enough, old Call-me-Dave's boasts to Cisco about offering "lessons in leadership at an extraordinary and turbulent time in global affairs" do not explain why he snatched up his toys and ran away from the Brexit mess he created, leaving such modern political titans as current prime minister Theresa May and Labour opposition leader Jeremy Corbyn to pick over the political nuclear wasteland left by the referendum's fallout.

Cameron, along with his former Chancellor George Osborne, is a member of the Washington Speakers' Bureau, an agency that helps ex-politicians earn exorbitant fees for public speaking. The agency helped Osborne net a reported £500,000 in two months.

With that in mind, then, dear readers, how much do you think Cameron is earning being paid for playing golf and recounting funny stories about his time at 10 Downing Street? More or less than Osborne, or fellow Washington Speakers' Bureau members such as erstwhile Aussie PM Tony Abbott, former US NSA Peeping-Tom-in-chief Keith Alexander, Tony Blair (for it is he) or Gordon Brown?

Stick your pithiest guesses in the comments below and the best ones will, er, win the satisfaction of winning an anonymous internet quiz. We can't offer free Brit Beer Festival tickets every week. ®