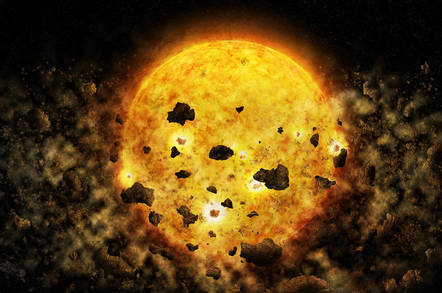 Artist's impression of smashed up pieces of young planets being devoured by a star. Image credit: NASA/CXC/M.Weiss

Scientists believe they have captured direct evidence of a star feasting on its own planets for the first time.

RW Aur, a binary star system located in the Auriga constellation 450 light years from Earth, has long puzzled astronomers. The light from one of its stars, RW Aur A, repeatedly dims and flickers back to life every few decades. But recently, the cycles have been happening more frequently and last longer than usual.

Now, a team of researchers believe they might know why. Using data collected by NASA’s Chandra X-ray Observatory, they have found evidence that of a mysterious ‘absorber,’ sucking up the star’s light. The absorber probably sits in the star’s inner disk, and is a made up of leftover debris from young planets that smashed into one another as the star's gravity pulled them in.

“Computer simulations have long predicted that planets can fall into a young star, but we have never before observed that," said Hans Moritz Guenther, a research scientist at the Massachusetts Institute of Technology, who led the study.

"If our interpretation of the data is correct, this would be the first time that we directly observe a young star devouring a planet or planets."

It explains the strange periods of dimness and brightness as previous events may have been from large pieces leftover from the original collision, that smashed into one another and split apart creating more debris.

"It's speculation, but if you have one collision of two pieces, it's likely that afterward they may be on some rogue orbits, which increases the probability that they will hit something else again," Guenther said.

Iron, good for you, not so much for others

The idea also helps scientists explain another weird property: the star’s disk contains too much iron. The level is not as high as the amount on Earth or even the Moon, but higher than typical environments around stars.

"Here, we see a lot more iron, at least a factor of 10 times more than before, which is very unusual, because typically stars that are active and hot have less iron than others, whereas this one has more," Guenther said. "Where does all this iron come from?"

Hello DARKNESS, my old friend. I've come to talk with you again... about a 10,000-pixel alien-hunting camera

If RW Aur A sucked its planets in and, indeed, caused them to crash into one another. And if one or more of the planets contained a high abundance of iron, it could dump a load of the heavy metals into the star’s disk. These particles would also obscure the star’s light as the material is absorbed into the star.

"There are many processes that happen in young stars, but these two scenarios could possibly make something that looks like what we observed," Guenther said.

The team hopes to continue monitoring the star to see if the brightness and iron levels change. It may also help other astrophysicists study other planetary systems.

“Much effort currently goes into learning about exoplanets and how they form, so it is obviously very important to see how young planets could be destroyed in interactions with their host stars and other young planets, and what factors determine if they survive," he concluded. ®