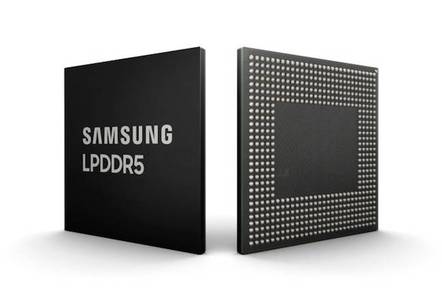 It's black. It's boring. It's really, really fast: Samsung's LPDDR5

Samsung has shown off the first prototype of a somewhat-bonkers DRAM chip: at 8 Gbits, it's not news in terms of scale, but the LPDDR5 silicon pushes bits out the door at 6,400 megabits per second.

Since it's a prototype, we can't say the memory is “coming to an iPhone near you”; rather, the company says, delivery will be “in line with the demands of global customers” – in other words, nobody's had time to design the DRAM into gadgets yet.

The “10nm-class” (as Sammy explained at the bottom of its announcement, that's a “process node between 10 and 20 nanometers) chip will join the company's premium DRAM lineup, alongside a 16 Gbit GDDR6 chip that arrived in December 2017, and a 16 Gbit DDR5 that landed last February.

Samsung highlights two applications for the wow-that's-fast memory (1.5 times its current 4,266 Mbps LPDDR4X) – 5G smartphones, and mobile artificial intelligence applications. The company notes that the data rate means the LPDDR5 “can 51.2 gigabytes (GB) of data, or approximately 14 full-HD video files (3.7GB each), in a second.”

The top speed is with the chip operating at 1.1V; it drops to a mere 5,500 Mbps operating at 1.05V. Samsung said the chip gets its speed boost partly by having 16 banks on the inside, rather than eight.

Low power is also important for Samsung, with the company claiming a 30 per cent power saving.

Power-saving features include the chip cutting its voltage in line with the application processor's operating speed; the chip avoids overwriting cells with zeroes; and there's a deep-sleep mode whose power consumption is half the “idle” consumption of the current LPDDR4X chip.

The prototype was an 8 GB package of eight individual LPDDR5 chips, tested and validated with unnamed partners. It was assembled at Samsung's Pyeongtaek facility in South Korea. ®