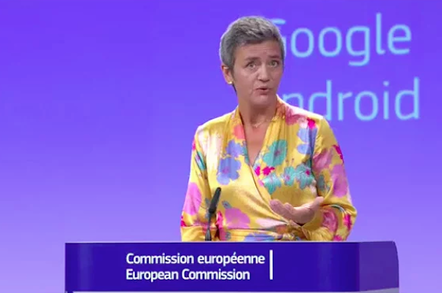 Analysis What convinced the European Commission that it had a Microsoft-scale competition problem on its hands with Google isn't a mystery. Google engaged in a carbon copy of '90s Microsoft-style tactics.

Google leveraged its platform dominance in Android to promote its own services and apps, at the expense of third-party services, the commission said today. It was Internet Explorer and Windows Media Player all over again.

Today, Europe's competition commissioner, Margrethe Vestager, fined Google €4.34bn (£3.87bn) for using Android to strengthen its search monopoly. It has 90 days to mend its way or face further penalties of up to 5 per cent of the average daily worldwide turnover of parent firm Alphabet.

The commission objected to three practices in particular: the requirement to preinstall Google Search and Chrome, payments to phone makers to make Google Search the default, and restrictions on creating "forks" of Android.

"Google has used Android as a vehicle to cement the dominance of its search engine," said Vestager. "These practices have denied rivals the chance to innovate and compete on the merits. They have denied European consumers the benefits of effective competition in the important mobile sphere. This is illegal under EU antitrust rules."

Fine of €4,34 bn to @Google for 3 types of illegal restrictions on the use of Android. In this way it has cemented the dominance of its search engine. Denying rivals a chance to innovate and compete on the merits. It’s illegal under EU antitrust rules. @Google now has to stop it

"Android is locked down in a Google-controlled ecosystem," said Vestager. She said manufacturers were interested in licensing Amazon's FireOS Android. But by making even one FireOS phone, the OEM would have lost the ability to include Google Play Store on its other devices.

"The fine reflects the seriousness and the nature of the violation of Europe's antitrust rules," she said.

"At a minimum it requires Google to stop and not re-engage in the three types of restrictions I have described."

Understanding the History of the Android Smackdown

The Register gave readers an insight into the Android investigation over a succession of exclusive stories.

Four years ago we reported that the competition commission was homing in on Google's MADA (Mobile Application Distribution Agreement) contracts. These specify what a phone maker is and isn't allowed to bundle with the phone, right down to the placement of icons on the home screen. The carrot is access to Google Play Services, nominally administered through third party compatibility tests. The stick is non-compatibility. As one Google executive admitted in an email: "We are using compatibility as a club to make them [OEMs] do things we want."

Although the Android AOSP base is open source, Google moved more and more key functionality into the ever-growing GMS (Google Mobile Services) stack: into proprietary middleware.

"Android GMS is a big binary blob that you must integrate. Google has ratcheted it up over the past year. When you sign a MADA, you know it will change," a senior executive at one phone maker told us. Google added 5,000 new calls to Android L alone. A phone without access to GMS struggles even to get an accurate location fix.

But the commission's enquiries were met with an unusual silence. Two months later the commission had to get tough. Phone makers weren't talking, and it had to remind them it had the power to fine them if it suspected they were withholding information.

The new competition commissioner, Margrethe Vestager, wasn't impressed by the cosy chats her predecessor had been having with Alphabet chairman Eric Schmidt, and the glacial progress over the Android investigation. In 2016 she threw out the Almunia deal and slapped a $2.9bn fine on Google for abusing its search dominance to squeeze out verticals.

In April that year she sent out a formal Statement of Objections. It identified three areas of abuse.

How might Google mend its ways? Vestager could help.

"These three restrictions are contractual. So the first thing is to take away the contractual restrictions, and see if that is ... effective. It is Google's responsibility to figure that out."

She hinted that giving end users a choice in the OBE [out-of-the-box experience] and allowing operators to provide choices might also be effective. She didn't name it, but Microsoft offered users a choice of browser (a "browser ballot") in response to a complaint by Opera. That took two years to implement.

"Fines make headlines. Effective remedies make a difference," said Shivaun Raff, CEO of Foundem, which made the first competition complaint against Google in Europe a decade ago.

Vestager said one investigation that had Google attempting to comply with a competition remedy – the one in which Google has promised to give vertical search companies a fair shake of the stick – is still "an open question".

"Technology serves us – not the other way around," Vestager concluded.

A Google spokesperson told The Register: "Android has created more choice for everyone, not less. A vibrant ecosystem, rapid innovation and lower prices are classic hallmarks of robust competition. We will appeal the Commission's decision."

Bring on the forks? Vestager seemed to hope so.

"Others can now show their work their merits." ®

Google today is much bigger than Microsoft was when the US found the company was breaching antitrust law. Google yields Alphabet $95bn in revenue from ads; Microsoft raked in $22bn in 2000 – $32bn in today's money – when the first judgements were handed down. (You can read El Reg's extensive coverage which started with this story in August 1998 and ran for some time.) There are billions more devices. And Google technology is far more pervasive than Microsoft's ever was.

How did the commission calculate the €4.34bn fine? Vestager explained that it was based on the duration and the seriousness of infringement, and then the turnover of the company. "We turn the handle and – boof! – out comes a number."