We can’t have Matt Hancock calling a hospital and hearing: baa-ruhr-reee-uh-reeee-uh-reee 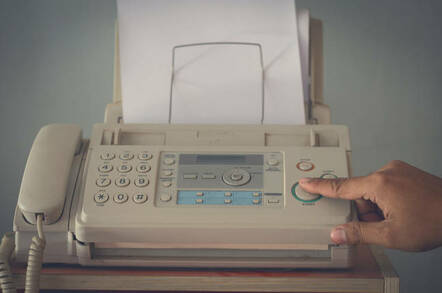 The NHS has been told to stop clinging onto the past, after it was revealed trusts have more than 8,000 fax machines still in use.

According to Freedom of Information requests submitted by the Royal College of Surgeons, Newcastle Upon Tyne Hospitals NHS Foundation Trust is the worst offender – with a whopping 603 machines.

Barts Health in London – the largest hospital trust in the UK – has 369 of the offending devices, while another three more trusts have 250 fax machines each: Norfolk and Norwich University Hospital, South Tees, and Stockport NHS Foundation.

Richard Kerr, chair of the Royal College of Surgeons, said it was "farcical" for the NHS to persist in using the outdated copy-flingers while forking out on bleeding edge technologies.

"The advances we are beginning to see in the use of artificial intelligence and imaging for healthcare, as well as robot-assisted surgery, promise exciting benefits for NHS patients," he said.

"Yet, alongside all of this innovation, NHS hospital trusts remain stubbornly attached to using archaic fax machines for a significant proportion of their communications. This is ludicrous."

It isn't the first time the NHS has faced criticism for its affection for historic communications pieces.

A report (PDF) last year found that one in 10 of the world's pagers is used by the NHS – and, as of March this year, the health service no longer has a choice of network, as Vodafone shuttered its pager network leaving only PageOne in play.

The NHS's IT estate doesn't fare much better, with creaking systems blamed for the 2017 WannaCry incident that crippled some of the nation's hospitals and for holding back progress, while efforts to create a paperless NHS have been dogged with delays.

Even the paper-based systems struggle, with Capita and Sopra Steria both recently receiving serious dressings-down over mass errors in delivering patient records.

Despite these obvious and fundamental problems with the basics, the government hasn't been shy in professing grand ambitions for digital services, plugging apps and algorithms to cut costs and boost disease detection.

Being transplanted in from the Ministry of Fun, it is expected that newly appointed health secretary Matt Hancock will continue to call for reforms of the NHS – so perhaps the fax machines have had their day.