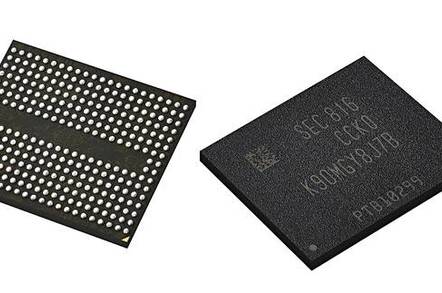 Falling up 2-way staircase and how it all works...

Building 3D NAND chips brings the problem of accessing cells deep in the structure. Object Analysis's Jim Handy discussed the problem of "connecting the peripheral logic (the row decoders) to all of those control gates that are on layers buried somewhere within the bit array" almost five years ago in a November 2013 article.

Back then, he wrote: "The problem boils down to this: You can’t run connections from each layer up or down the side of the chip to get to the CMOS circuits below.  Instead you have to create a terrace structure to expose and connect to each layer. These connections are made by etching a stair-step pattern into the layers and sinking vias down to connect with each level."

The vias are the vertical holes mentioned above and the terrace or stairstep structure is created by etching the layers in the dies. A YouTube video depicts the complicated process.

The stairsteps have specific widths and step heights. The more layers there are, the more steps there are and the higher the chip. Thus a 96-layer chip has a broader and wider base than a 48-layer chip and is about twice the height.

It's based on making stairs that are bi-directional – ie, they ascend or descend from two directions rather than just one.

His graphic shows the idea: 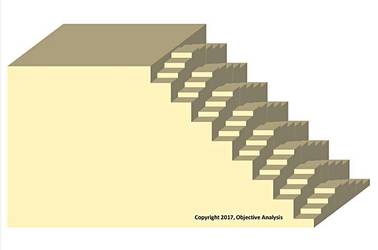 Handy said: “Samsung has reduced the die size of its 64-layer NAND while reducing process complexity and cost.” All this helps to explain why the firm has not had to resort to more expensive string-stacking.

The Korean chip manufacturer said its production process has better atomic layer deposition and manufacturing productivity is 30 per cent better than that of the 64-layer chip. It has been able to reduce the height of each cell layer by 20 per cent and prevent cross-talk between cells.

Samsung has not revealed the actual number of layers in the new chip, only saying there are more than 90 – it’s probably at or near 96 layers.

The V-NAND chip is a 256Gbit single stack device whereas Western Digital and Toshiba's sampling 96-layer chips are made from two 48-layer components stacked one above the other (string-stacking). Micron is also developing 96-layer chip technology.

According to Wells Fargo analyst Aaron Rakers, WD/Toshiba expects a 96-layer chip production ramp this quarter, with Micron saying its 96-layer chips will be shipping by the end of the year. Toshiba's prototype 256Gbit, TLC, 96-layer chip was announced in June 2017.

The operating voltage is 1.2 volts, less than the 1.8 volts used in Samsung's 64-layer V-NAND chip, meaning its energy efficiency is about the same. Its write speed is about 30 per cent faster, at 500μs. The firm claims the read signal response time is 50μs.

The chip also has a Toggle DDR 4.0 interface and can transfer data 40 per cent faster than the 64-layer product, at 1.4Gbit/s.

Samsung Electronics exec veep for Flash Product and Technology, Kye Hyun Kyung, said in a canned quote: “In addition to the leading-edge advances we are announcing today, we are preparing to introduce 1-terabit (Tb) and QLC (quad-level cell) offerings to our V-NAND lineup.”