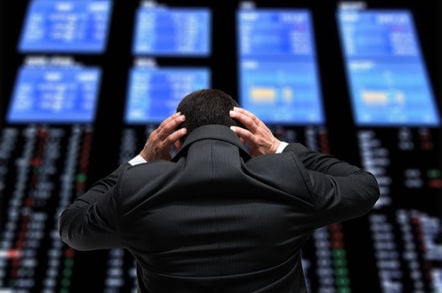 The noose around Tintri's neck tightened today as Nasdaq confirmed it will delist the company's stock on Thursday July 12.

The near-bankrupt, near office-less and employee-less Tintri was sent what's called a Staff Delisting Determination Letter from the US exchange that its shares are traded on, as the storage array biz has failed to file results for Q1 ended 30 April, 2018.

Unless the company requests an appeal of the delisting determination, trading of the company’s common stock will be suspended at the opening of business on July 12, 2018, and Nasdaq will file a Form 25-NSE with the Securities and Exchange Commission, which will remove the company’s securities from listing and registration on Nasdaq.

That means it effectively no longer exists as a publicly traded entity unless its shares can be traded on an alternative market somewhere else.

At the time of publication, its shares were just under $0.18, making its market capitalisation $6m. A year ago the company's stock was valued at $7.00 apiece.

Tintri said it had not yet decided whether it will file an appeal against the delisting determination.

A 26 June SEC filing said it had already received notice of noncompliance from the Nasdaq Stock Market and was at risk of delisting.

There is no dignity in this. The company has laid off virtually all of its staff, some claiming to have missed out on their final month's salary, has no manufacturing capability, many of its offices are shut, and support exists only as voice mail for customers to log problems.

The storage arrage supplier revealed it would run out of cash at the end of June and nothing has happened to give customers any certainty that Tintri can survive.

Some existing customers and channel partners profesed their love of the tech, but insiders told us the sales teams at Tintri were unable to convince more businesses to put their faith in its wares.

We were told that behind the scenes, Tintri has spoken to interested parties about selling its IP, but all signs point toward a bankruptcy of the business. ®

'Nervousness from customers is understandable'