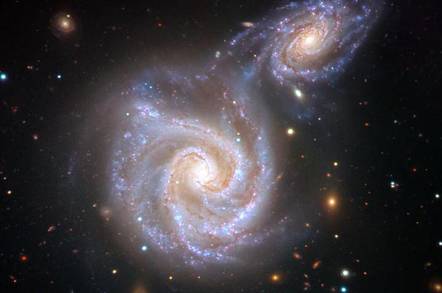 An artist's impression of the Milky Way colliding with the Sausage galaxy. Image credit: V. Belokurov (Cambridge, UK); based on image by ESO/Juan Carlos Muñoz

Around eight to ten billion years ago, a neighbouring dwarf galaxy known as the Sausage galaxy smashed into the Milky Way leaving a smattering of gas, dust, and stars.

A team of astrophysicists have traced back the leftover debris to piece together the cosmic catastrophe detailed in a paper published in the Monthly Notices of the Royal Astronomical Society.

"The collision ripped the dwarf to shreds, leaving its stars moving in very radial orbits" that are long and narrow like needles, said Vasily Belokurov, first author of the paper and a researcher at the University of Cambridge and the Center for Computational Astrophysics at the Flatiron Institute.

We plotted the velocities of the stars, and the sausage shape just jumped out at us. As the smaller galaxy broke up, its stars were thrown onto very radial orbits. These Sausage stars are what's left of the last major merger of the Milky Way," said Wyn Evans, co-author of the paper and an astronomy professor at Cambridge University.

They reckon that the Sausage galaxy is the largest dwarf galaxy to collide with the Milky Way to date. It’s total mass including gas, stars, and dark matter is more than 10 billion times more massive than the Sun. It imparted a lot of this material to the young Milky Way, creating the puffed up bulge at the center of its spiral, and the ring of stars in the stellar halo region.

“The Sausage stars are all turning around at about the same distance from the centre of the galaxy," said Alis Deason, co-author of the paper and a research fellow at the Institute for Computational Cosmology at Durham University.

"While there have been many dwarf satellites falling onto the Milky Way over its life, this was the largest of them all," said Sergey Koposov, co-author of the paper and an assistant professor at Carnegie Mellon University. ®