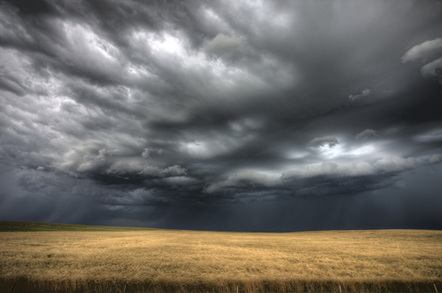 Updated Storage systems in several of IBM's European data centres have been down since the small hours, with engineers battling to fix an unspecified "network-related" problem they identified six hours after the outage began.

The IBM Cloud Storage wobble struck this morning at 0525 UTC, a disgruntled customer told El Reg, adding that it had left most of his firm's iSCSI devices "unusable".

"IBM Cloud engineering teams continue working together to identify the cause and resolution for the storage issues currently seen in AMS01, AMS03, FRA02, FRA04, MIL01," said an update issued to customers at 10:09 UTC today, seen by The Register.

This is the latest failure to hit IBM's cloud offerings. The branded IBM Cloud's McAfee-based antivirus buggered off for an extended lunchtime down the pub a few weeks ago, and the service was previously ranked bottom in Gartner's Random Dartboard Magic Quadrant ranking of infrastructure-as-a-service cloud offerings.

Softlayer was acquired by IBM in 2013 and rolled into its Bluemix brand. It is now being branded as part of IBM Cloud, along with all of Big Blue's other cloudy odds and sods. The old Softlayer infrastructure last collapsed altogether in early 2017.

Some weeks ago IBM announced that it had set up more cloud availability zones.

The latest update from IBM's beleaguered engineers, seen by us, reads as follows:

Next Steps: At this time, engineering teams are continuing to work closely to diagnose a network-related issue that may be the cause of the incident in each of these data centers.

No further information is available at this time, but engineers are diligently working towards identifying a solution.

IBM failed to respond to El Reg's request for comment. Perhaps its press office systems are also hosted on the IBM Cloud?

An IBM spokeswoman contacted us following publication of this story:

"Full service has been restored and client operations are back to normal." ®