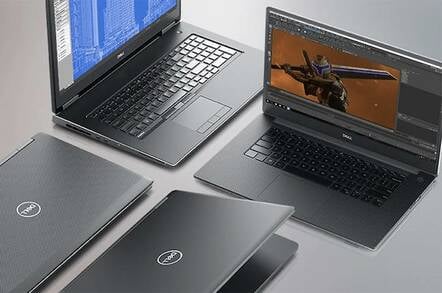 The many moods of the Dell Precision 7730 workstation

The 7530 can pack three NVMe SSDs or two SSDs and one hard drive. The 7730 goes one better (four SSDs, or three plus one HDD). RAID 0, 1 and 5 are available on both. Factory configurations allow 2TB spinning rust inside, or NVMe PCIe solid state disks for those who value speed over capacity.

You can slip Radeon or NVIDIA GPUs inside too.

Prices start at non-terrifying levels: the 7530 starts at US$1,199 and the 7730 at $1,479.00. Once you ratchet the RAM, add disks and GPU you’ll struggle to stay under $3,000, but that’s not vastly more than the base price for a quad-core MacBook Pro that lacks RAID, has only one disk and boasts a CPU a generation behind the Dells.

The new Precisions instead make a virtue of being 14 and 15 per cent lighter respectively, compared to their predecessors. Dell’s also tossed in smaller AC adapters to make them more portable. Although at 2.6kg and 3.17kg their presence will be felt. Dell expects them to attract developers delving into virtual and/or augmented reality. The Register imagines plenty will also find their way into the hands of roving engineers who will doubtless be comforted by ruggedisastion to the MIL-STD 810G spec. ®