What a flap: SIM swiped from slain stork's GPS tracker used to rack up $2,700 phone bill 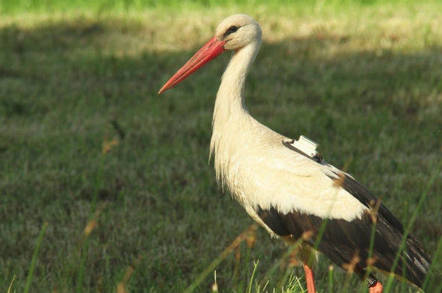 The nature group Grupa EkoLogiczna attached the GPS device to the back of the bird, named Kajtka, in April 2017 while it spent the spring in Poland. The gizmo was supposed to track the stork's progress as it migrated south to Africa. Kajtka made the trip safe and sound, and on February 1 this year, it started north again for a European summer vacation.

Ten days later, Kajtka reached the Blue Nile valley in Sudan, and suddenly came to a stop. One could assume was a dead stop, since the bird didn’t move again until April 26, when things got odd for the scientists monitoring Kajtka’s GPS feed.

That day the signal took a circuitous 25 kilometre (16 mile) trip, and then went dead. Then on June 7, the charity’s mobile phone company handed it a massive bill from Kajtka. The group said earlier last month someone took the tracker apart, and used the SIM card for 20-hours of eye-watering phone calls.

It looks likely Kajtka was either taken by nature red in tooth and claw, or fell prey to the internal parasites that can plague such birds. Then some enterprising soul found the tracking device, took it to see someone with a bit more knowledge and tools, and then started catching up with foreign friends, or phone services, for free.

White storks are amazing creatures, flying thousands of miles every year from western Europe to as far as South Africa. To conserve energy, they ride thermals and so avoid crossing the Mediterranean on the trip, and instead stream across the Middle East land bridge or pop over the Strait of Gibraltar.

Thanks to the miniaturization of technology, and the increasingly pervasive spread of mobile phone networks, bio-boffins can study these migrations much more closely. Early attempts using bulky and un-aerodynamic trackers tended to get birds killed by tiring them and making it more likely that they would be killed by predators.

White storks are under particular scrutiny at the moment due to fears in Europe of the spread of the West Nile virus, which is carried via mosquito-infected birds. While usually non-fatal to humans, it spreads like wildfire and has killed more than 1,110 Americans from Alaska to Hawaii since it first cropped up in the US in 1999 in New York’s Queens district.

Some storks have been found to carry the West Nile virus, although others seem to have developed defenses to deal with it. Eleven storks infected with a virulent form of the bio-nasty were found in Israel in 1998, but so far it doesn't appear to spread to humans, helped by the ban on blood transfusions from Americans in some countries.

Tracking these migration patterns, and hopefully limiting the spread of West Nile, is being made much easier by modern technology. However, maybe the tracker makers should include a little more security, otherwise these magnificent creatures may be hunted for their SIM cards. ®