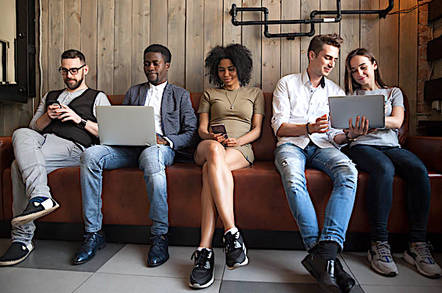 A laid-off IBM cloud sales ace is suing the IT giant for age discrimination, alleging he was forced out for being too old.

Jonathan Langley joined Big Blue in 1993, and worked his way up the ranks over the next 24 years. Then, in 2017, as worldwide program director and sales lead of the Bluemix software-as-a-service, he was let go.

According to his lawsuit paperwork, Langley, 60, "was a successful employee and his performance met or exceeded IBM’s expectations."

Had he "been younger, and especially if he had been a millennial, IBM would not have fired him," his filing claimed.

Langley, of Texas, USA, was seemingly doing very well for himself within Big Blue. For instance, he netted a $20,000 performance bonus in January 2017, the largest such windfall within his team in Austin, we're told. His annual performance scores put him at the top or near the top of his group.

Curiously, the month before, though, he was warned privately by his boss's boss – Andrew Brown, veep of worldwide sales of IBM's hybrid cloud software – that he needed to look for a new job, it is claimed. At the end of March 2017, Langley was formally told he would be laid off at the end of June.

Langley was unable to get a role elsewhere within IBM, and its HR system marked him as having "resigned," it is claimed. In early July, days after he left the business, Langley got a letter congratulating him on his "retirement."

IBM management told the US government's Equal Employment Opportunity Commission that Langley was laid off after his supervisor Kim Overbay ranked him, in January 2017, as the worst performing person on his team, despite him bagging the biggest bonus that quarter, and earlier meeting or exceeding performance expectations, according to the lawsuit.

Crucially, because Brown, as it is claimed, tipped off Langley via email that he was facing the chop a month before Overbay drew up her table, the ex-IBMer concluded he was selected for termination due to his age – and not his ability. IBM had, in Langley's view, already made its mind up to get rid of him before his supervisor had ranked him.

Langley also claimed IBM lied to the commission by wrongly telling the watchdog that he was "not collaborative, communicative, [and] responsive to the sales team," that he was terminated due to his performance rather than age, and that he was on a team of four rather than eight.

What gave him the idea IBM prefers youngsters?

If you leaf through the ex-sales lead's lawsuit, you'll find numerous examples of what he believes is evidence IBM unfairly favors the young over the old regardless of ability and knowledge.

The technology giant has made no secret of the fact it is attempting to undergo a transformation from a fuddy-duddy mainframe manufacturer to a wonderful agile bazaar of cloud, analytics, mobile, security, and social technologies.

IBM staffers openly court millennials, a generation of folks that generally covers people born after 1980 or those who came of age around the year 2000. Its representatives told a 2014 conference Reinvention In The Age of The Millennial that Big Blue hopes to “leapfrog the existing perception of IBM to become a leader in millennial engagement," and thus find the right people to drive its cloud, analytics, mobile, social and security products, according to Langley's complaint.

It's alleged, in effect, that IBM reckons older people are unable to master these technology sectors, and are stuck instead in the worlds of on-premises mainframes, databases, and custom hardware that admittedly keep the world as we know it ticking over. Rather, the z/OS giant would prefer to lure the latest generation of geeks streaming into Amazon, Microsoft, Google, and similar corporations.

"IBM has devoted countless millions of dollars to its effort to rebrand as a hip, millennial-centric tech company," Langley said in his court filing.

He also said Big Blue aims to make 55 per cent of its workforce, in IBM's words, "early professional hires" by 2020, with an influx of younger staff to, again according to IBM's internal documentation, "correct [its] seniority mix."

The lawsuit gives the database giant both barrels for, what he believes is, unfair criticism of baby boomers, the generation born after the end of the Second World War in 1945. Here's an excerpt from Langley's filed complaint:

Riehle, who moved on from IBM in 2017, told The Register Langley's above summary was, in her view, "an inaccurate representation" of a company blog post she wrote on the subject of worker age and dysfunctions within a team.

"The blog post summarizes research findings from a study – not my personal opinion," she told us, and is "in no way reflective of my feelings about boomers or millennials."

Meanwhile, Langley also cited videos, such as the one below that states "we don't sell tabulating machines, typewriters, hard drives, PCs, or laptops anymore," as IBM's efforts to draw in more younger staff, allegedly to the detriment to older skilled workers:

"IBM treated substantially younger persons more favorably by signaling through its internal and external branding and marketing that IBM wished to hire and/or retain younger persons," stated Langley in its lawsuit filing.

The ex-IBMer has asked the court to force IBM to give him his job back along with lost pay and benefits, damages, his legal fees covered, and so on.

A spokesperson for IBM told The Register today: "IBM complies with all applicable laws, and we will defend this case vigorously." Langley declined to comment amid ongoing legal action.

By June 21, this year, Big Blue's lawyers were due to submit to the US court system a response to Langley's lawsuit, filed in May 2018 in the western federal district of Texas. However, one day before the deadline, its legal eagles successfully applied for an extension, asking for more time to go over the complaint. The IT giant now has until July 12 to respond.

Langley was among those axed in March 2017, as we reported, just a few months before Big Blue pulled the plug on the Bluemix brand and merged it into IBM Cloud.

The former Bluemixer filed his lawsuit a few weeks before an investigation revealed IBM's five-year drive to shed its elders and appeal to younger techies.

Early last year, the corporation insisted its staff work from the office, rather than home, a move that was seen as a handy way to ditch older staff who lived too far from the nearest Big Blue hub while appealing to graduates who fancied working in places like Austin, New York City, and San Francisco. ®

Calling all Bongs – this won't hurt a bit

No top-ups, please, I'm a millennial: Lightweight yoof shunning booze like never before

Pink hotpants cocktail, though? Oh, go on then