While you were basking in the sun, the relentless march of the Windows-maker continued

Lakes of data, buckets of quantum. IntelliMouse?! It's 7 days in Seattle 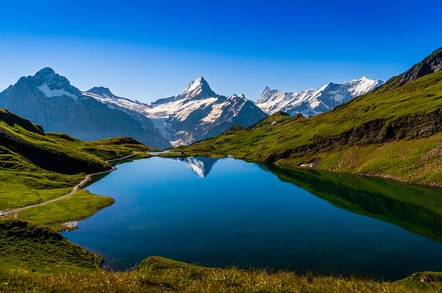 Seven days is a long time in the Microsoft world, although possibly not long enough to complete an April 2018 Update of Windows 10. This week brought both good and bad news from the bowels of Redmond.

Windows giveth and taketh away

While Microsoft quietly did away with support for older CPUs in Windows 7, Windows 10 saw fixes that might finally address longstanding issues with Chrome and the April 2018 Update, as well as dealing with problems with loathed SMB1 networking and lamented Media Center content respectively.

Windows 10's future functionality was also given a trim as Sets failed to make the cut for a second time as the latest Insider Bug Bash got under way. Perhaps it will be third time lucky in 2019.

The speed at which the April 2018 Update has been flung from the ramparts of Redmond was again confirmed by ad slinger AdDuplex in a report issued this week. The June figures, which are either impressive or alarming depending on your update experience, showed 78.1 per cent of Windows 10 installations had been upgraded.

While user complaints have quietened somewhat as Microsoft issued patch after patch to deal with the problems, the rate at which the April 2018 Update has marched through the Windows world can best be described as "relentless". Or perhaps "foolhardy".

Although LinkedIn usually likes to make use of its in-house tools, such as Samza, it had to admit defeat where translation was concerned and passed the torch to the Microsoft Text Analytics API, an Azure Cognitive Service able to spot 120 languages.

Time will tell if this apparently much-requested feature will result in some exciting translation fails, such as the memorable tweet from Israeli Prime Minister Benjamin Netanyahu that described Eurovision winner Netta as "a real cow" following a hiccup in Microsoft's translation service. Slightly worryingly, the translated text has since changed to "a real sweetheart" meaning that a translation seen in LinkedIn one day might say something quite different by the next.

There was good news and bad news for Azure, with GitLab announcing it was jumping ship for Google Cloud as Microsoft trumpeted the arrival of Azure IoT Edge to shunt work out of the cloud to the device in an effort to improve responsiveness.

Users of Microsoft's Government Community Cloud (GCC) will be looking nervously at their desktops from 17 July as the availability date of Teams was announced. Lucky, lucky administrators were delighted to learn that the Slack-alike "will be enabled by default".

To crowbar Teams into the government workspace, Redmond has upped the compliancy with the likes of HIPAA, IRS 1075 and all manner of retention and audit policies. Unfortunately, not all of the functions familiar to commercial users have made the cut: call and meeting recording isn't there yet, email notifications might make an appearance in the future and, horror, Giphy is disabled by default.

With the US Administration emitting policy by tweet, the removal of tedious words in favour of a suitably witty GIF seems a logical progression.

While Microsoft continues its glacial march to making a quantum computer that exists somewhere other than on whizzy PowerPoint slides (at least according to boss of all things quantum at Redmond, Julie Love), the Dubai Electricity and Water Authority (DEWA) announced its intention to get in on the act. It is the first non-US organisation to leap into Microsoft's quantum programme.

DEWA hopes to leverage the oft-promised awesome power of quantum computing to balance resource consumption and energy needs from a variety of sources in a way that traditional computers just can't manage. Also, Dubai needs to find a new way to burn money after building that indoor ski slope. Making a working, large-scale quantum computer is an order of magnitude more complex, although offers less scope for ski versus snowboard arguments.

And finally, hardware. Rumours, reality and everything old is new again

The hardware rumour mill was churning as whispers (later confirmed) circulated that Microsoft was about to release a USB-C adaptor the size of an aircraft carrier for Surface devices still tied to USB 3.

Andromeda, a device that Windows Phone hold-outs hope will smite upstart iOS and Android hardware with its mighty Windows 10 hinge, continued its trudge from vapourware to maybe-reality as Panos Panay, boss of Devices at Redmond, trolled teased hardware fans with a tweet showing a hinged picture frame.

A day later, a "leaked" email added grist to the mill that a new pocketable device with a hinged screen might be making its way from fanboy render to showroom before long. Probably best not start writing an excited letter to Santa just yet, though – like all vendors, Microsoft has form in killing off products before launch. Sometimes mere hours before launch. Surface Mini, anyone?

Wished-for hardware aside, Redmond also reminded us all of just how good the old Microsoft IntelliMouse was before its final incarnation some 15 years ago.

In a blog posting trumpeting the arrival of the "Classic IntelliMouse" (yours for a mere £39.99) Microsoft Category Lead Mark Rowland reckoned the revamped pointing device was more "an evolution than a revolution".

The only problem is that Microsoft launched something very similar last year, with online retailer Amazon reckoning it arrived in its UK store just in time for Christmas. Christmas 2017.

Whatever the reason for availability happening six months before announcement, we at The Register like nothing more than a soothing dip in the waters of nostalgia, so please enjoy this retelling of what happened nearly 20 years ago when our esteemed MD and publisher, Linus Birtles, bade farewell to dusty balls and got to grips with his first optical IntelliMouse. ®