Registry to ban Cyrillic .eu addresses even if you've paid for them 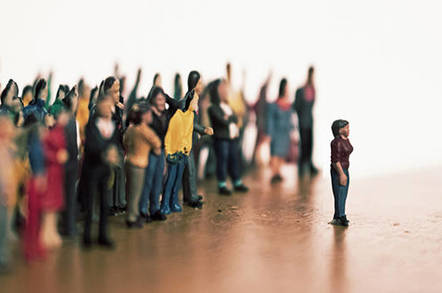 The internet registry operator for Europe's .eu domains will forcibly dump yet more internet addresses, with a decision to kill off any domains in the Cyrillic alphabet.

In a note this week – provided only in English – the registry said it will forcibly delete any .eu domains that include Cyrillic letters on May 31, 2019, regardless of whether registration has been paid for beyond that date.

The move is extremely unusual in the internet world, which has a general policy of retaining existing internet addresses even when the registry itself is discontinued. It follows an extraordinary decision in March to delete any .eu domains owned by organizations that live in the UK following the exit of the UK from the European Union aka Brexit.

The Brexit decision was imposed by the European Commission whereas this week's decision to kill of all Cyrillic names seems to have come from EURid itself. The registry hasn't said how many domains will be affected but it is estimated to be around 1,500 in total.

EURid has put forward a number of explanations for its decision but omitted key details that raise questions over its motivation.

Despite starting its notice: "As announced in May of 2016, the Cyrillic domain name(s) with the Latin .eu extension will be phased-out, i.e. deleted, following a three-year phase-out period ending on 31 May 2019," a dig into EURid's documentation reveals that that critical detail – the deletion of existing, paid-for names – was buried far down the page.

The announcement came with the introduction of a new internet extension, also run by EURid, of '.ею' – a Cyrillic version of ".eu."

In what was in effect a forcible relocation of Cyrillic names, EURid created a clone of all Cyrillic names under .eu and put them under the new .ею.

It said it would not charge for those new domains until May 2019 but that decision was communicated as not charging registrars – the companies that register domains on behalf of others – for the cloned names. The fact that existing .eu domains would be deleted was tucked away near the end of a list of "guidelines" with the statement: "At the end of the three-year term, all legacy domain names will be deleted by EURid unless the registrar or registrant has already done this beforehand."

EURid didn't move across the .eu domains' DNS details to the new Cyrillic ending, meaning that owners of Cyrillic .eu domains need to actively claim their cloned domain and then add the relevant details to get them functioning on the new registry.

EURid claims that the forced deletion of existing domains is needed in order to protect users against what are called "homograph attacks" where domain names are registered with non-Latin scripts to make them look like all-Latin domains e.g. a Cyrillic "a" is used in place of a Latin "a" to make people think they are on the website of, say, "apple.com."

These dishonest URLs have been doing the rounds for years and security researchers continue to warn about them but the internet community has failed to work together sufficiently to fix the issue.

One rule for us

With the launch of '.ею' in June 2016, EURid announced it had "fully enforced the basic rule that the second level script must match the top-level script, in order to eliminate any possible confusion." In other words, if you have a Cyrillic domain it can only be matched with a Cyrillic internet extension.

Which is fine except for two things: first, it is an internet norm to retain existing addresses rather than delete them; and second, EURid continues to break those same rules with numerous other domain under .eu, including those featuring any letter in the entire Greek alphabet plus special characters from an range of European languages, such as the German ü, the Romanian ș, and the Swedish å.

The reality is that EURid is rigidly applying rules in one context and not in another.

The decision to create a Cyrillic version of .eu and then force all Cyrillic names into it, deleting any that were registered in the Latin version, could be seen as good housekeeping – albeit one that goes against internet norms.

But given the exclusionary approach taken with .eu domains registered in the UK thanks to Brexit, the decision to push ahead with deleting all Cyrillic names does appear to reflect the increasingly xenophobic attitudes that continue to dominate European politics.

As the UK updates its .eu Brexit advice yet again, an alternative hovers into view