Is it a bird? Is it a plane? Is it a giant alien space cigar? Whatever it is, boffins are baffled

Or 'Oumuamua could just be a weird tail-less comet 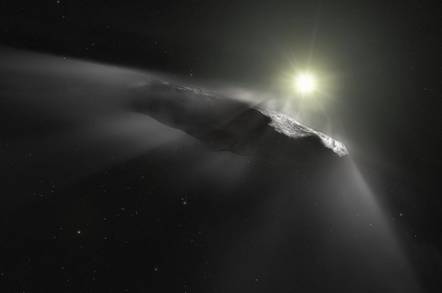 What is that thing? At first, there were a group of fantasists who believed it was an alien starship. Those claims were quickly debunked by researchers who classified it as an interstellar asteroid.

Now another team of scientists reckon it’s actually a comet, according to a paper published in Nature on Wednesday.

Comets are small icy bodies that appear luminous with a glowing tail as the trapped volatile material buried beneath the ice melts and vaporizes in the Sun's heat, leaving tails of glittering dust and gas.

'Oumuamua, measuring over 200 metres along, was spotted last year in October, and had no signs of a comet tail despite being so close to the Sun. But its trajectory hints that it may be a comet – just a very inactive one.

"Unexpectedly, we found that 'Oumuamua was not slowing down as much as it should have due to just gravitational forces," said Marco Micheli, lead author of the study and a researcher at the European Space Agency’s Space Situational Awareness Near-Earth Object Coordination Centre in Italy.

Further analysis ruled out the possibility that the higher-than-expected speed was due to solar radiation pressure, frictional forces, interaction with the solar wind, or even its odd geometry.

Instead, 'Oumuamua could be getting a gentle push from the release of gas pressure on its surface - a process known as outgassing in comets. The team still haven’t detected any signs of dust or a tail seen in more traditional comets, however.

This could be down to its small size, since the object is only a couple hundred meters across. Perhaps 'Oumuamua is only releasing a tiny amount of dust, or maybe just pure gas, which would be difficult to see with telescopes.

“It was extremely surprising that 'Oumuamua first appeared as an asteroid, given that we expect interstellar comets should be far more abundant, so we have at least solved that particular puzzle,” said Olivier Hainaut, co-author of the paper and a researcher at the European Southern Observatory. “It is still a tiny and weird object, but our results certainly lean towards it being a comet and not an asteroid after all.”

'Oumuamua is an extremely rare object, and is believed to be the Solar System’s first interstellar visitor to be seen passing through. At the moment, it has flown past Jupiter’s orbit and in another four years, it’ll pass by Neptune and will finally exit back out into the open emptiness of interstellar space. ®