When Nano Server or Server Core are too small, 'windows' will be in the Goldilocks zone 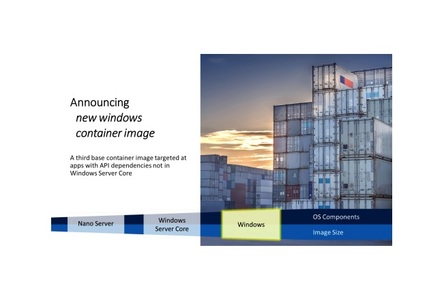 Microsoft’s released a new version of Windows called “windows” that ships as a container image.

Why does the world need a new Windows?

Because Microsoft’s chats with developers have taught it that they want something with more functionality than either Nano Server or Windows Server Core.

Microsoft’s Lars Iwer, a program manager for Hyper-V, explained, “Quite a few customers were interested in moving their legacy applications into containers to benefit from container orchestration and management technologies like Kubernetes.”

“However, not all applications could be easily containerized, in some cases due to missing components like proofing support which is not included in Windows Server Core.”

Microsoft’s not explained if the new image is full Windows Server or a subset. The graphic atop this story suggests there are more APIs available than in either Nano or Core, and Iwer’s post says reasons for the new imagine include “to run automated UI tests as part of their CI/CD processes or use other graphics capabilities like DirectX which are not available within the other container images.”

We’ve asked Microsoft if it can tell us more about whether the image is full Windows Server or a subset and, if the latter, just what’s inside.

For now, the image is available with a quick docker pull mcr.microsoft.com/windows-insider:10.0.17704.1000 and on Windows Insider preview.

If Microsoft tells us what’s in this image, we’ll update this story. ®

Microsoft's told us a bit more about this release, as follows:

"Much like our other two base images (Server Core and Nano Server) the new Windows image is designed to be headless (no remote desktop) but is constructed using the Windows API set, thus APIs such as GDI are available providing a much larger compatibility surface for developers building expansive container images."

We're still trying to get more detail. This must surely go down as the least-hyped Windows launch ever.