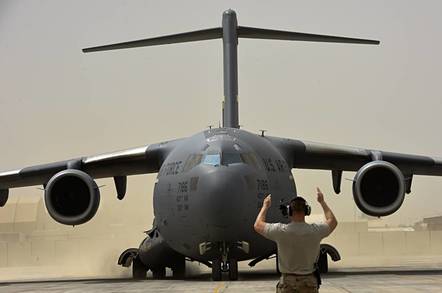 Nutanix has scored a $45m contract, via an unnamed channel middleman, to supply hyperconverged kit to US Air Forces Central Command (AFCENT)*.

He estimated the $45m "will not all flow to Nutanix" - the vendor will bag about $30m to $35m as the business will be "split between product revenue and a five-year services agreement".

This is Nutanix's "largest single deal" in its relatively short history. The business was founded in the US in 2009.

"It reflects the tremendous momentum that Nutanix is seeing in the federal vertical," he wrote in a paper for the global investment house and wealth management biz.

Ader claimed Nutanix has gained almost 100 new US government customers in 2017, taking its total in that sector to around 320.

The contract was actually won by a US-based channel player, who will presumably gladly hoover up the remainder of the money on the table.

A hefty rise in operating expenses, largely due to an expansion of sales and marketing team, left the business nursing a net loss of $85.6m, albeit better than the net loss of $96.8m in the prior year's quarter.

AFCENT, as its name suggests, is the air element of US Central Command (USCENT) that is responsible for air ops, unilaterally or with allies. It builds contingency plans in the pursuit of "national objectives for USCENT's 20-nation area of responsibility in Southwest Asia".