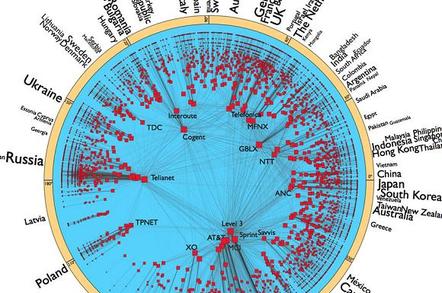 CAIDA, the University California, San Diego-based internet infrastructure research operation, has taken a look at what the next few years might hold for the information superhighway – and is worried that its model of the 'net might be starting to creak.

Late last week, the 20-year-old Centre for Applied Internet Data Analysis (CAIDA), which studies internet traffic to help keep the global network stable, published its five-year program plan, and in reviewing its operations, it came to the conclusion that something's got to change:

The current mode of collaboration simply does not scale to the exploding interest in scientific study of the Internet.

Not only does the report say CAIDA needs new collaborative modes, it also needs to keep up the pace in its tech development.

That puts a premium on high-performance research infrastructure, like 100Gbps links to the probes that collect data from around the world, as well as a software effort to create “new measurement and analysis components” that can be made more accessible and interactive through published APIs and web services.

CAIDA to survey peers, colo sheds and ISPs for new map of internet

CAIDA also acknowledges that its internet topology, congestion measurement, and understanding of threats takes on new import in an internet that routinely carries nation-state attacks.

“We will undertake a new project that studies topological weaknesses from a nation-state security and stability perspective,” the plan stated, adding that the group “will explore implications of these analysis for network resiliency, economics, and policy.”

Two other new projects are highlighted in the plan: HI-CUBE, a hub for incident investigation; and Internet Outage Detection and Analysis – Next Phase), which CAIDA hopes will be able to watch incidents in real time, 24x7.

Its existing projects – the Archipelago measurement platform, the UCSD Network Telscope, MANIC (Mapping and Analysis of Interdomain Congestion), the Spoofer IP address validation tools, and CAIDA's traffic monitors – are slated to get further development and upgrades, the plan said.

The Network Telescope, for example, needs more processing power – the Internet's a huge place, after all. It's a “darkspace” routed address space that quietly watches for unsolicited traffic, to allow “visibility into a wide range of security-related events”.

Its work goes back at least as far as 2005, when the CAIDA 'scope helped trace the spread of the Witty worm.

To keep pace with the scale of the Internet, CAIDA plans to upgrade its infrastructure, use NSF-funded HPC processors for its data analysis, using virtual space on UCSD's Comet supercomputer, and write new live packet capture and distribution software.

Other highlights of CAIDA's research plans include studying the Internet's topological susceptibility to country-level manipulation; and developing a universal measurement endpoint interface (PacketLab).

CAIDA adds geo-tags to its Internet AS dataset

310,000 network links: that's how big your Interwebs grew. Mapping them is very useful