Why aren't startups working? They're not great at creating jobs... or disrupting big biz

We've been living a lie! 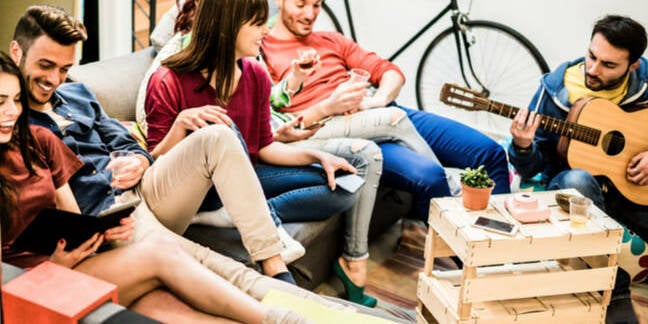 If you think we're living in the Golden Age of the Entrepreneur, think again.

In the US, startup rates are falling and employ fewer people than they used to. Businesses take longer to form. Meanwhile, subsidies to business have tripled since 1990, and big business is far better at playing the subsidy game. The taxpayer isn't getting much bang for their buck.

These are all findings of the Brookings Institute's Hamilton Project, which seeks to identify obstacles to business dynamism. A very readable new report – The State of Competition and Dynamism: Facts about Concentration, Start-Ups, and Related Policies by Jay Shambaugh, Ryan Nunn, Audrey Breitwieser, and Patrick Liu – sums up the US business landscape in 40-odd pages (PDF).

The project praises startups as a source of productivity and employment growth, but the results raise some awkward questions for policy-makers. Should they drool over startups when supporting slightly older, more successful businesses – which may be better at creating jobs – might be wiser? (By doing so, the state wouldn't be "picking winners" – the market will have done that.) 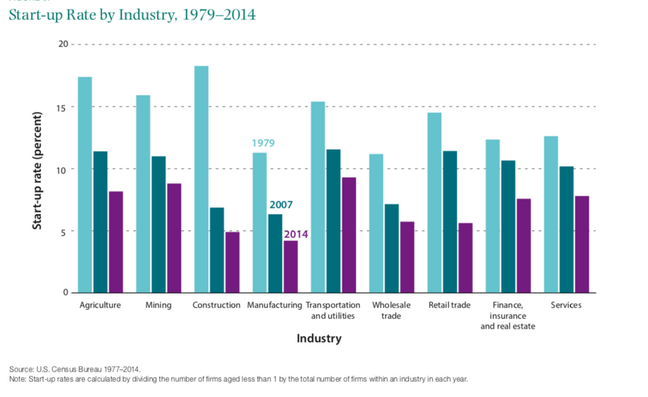 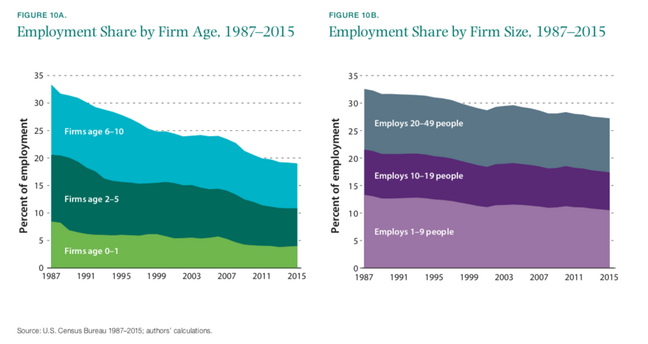 Remarkably, the employment share of young firms has fallen by more than a third since 1987.

"Recent startups are producing strikingly fewer jobs than their predecessors, and this is particularly the case during their earliest years," the authors note. "Net job creation as a fraction of employment for one-year-old firms (not shown) hovered in the 1 to 2 percent range from the late 1980s through 2000 – as the surviving startups added more employment than failing startups subtracted – but the rate fell gradually to less than -10 percent in 2009, has not fully recovered since then, and still remains negative. At the same time, the net job creation rate for two to five-year-old firms was more consistently negative." 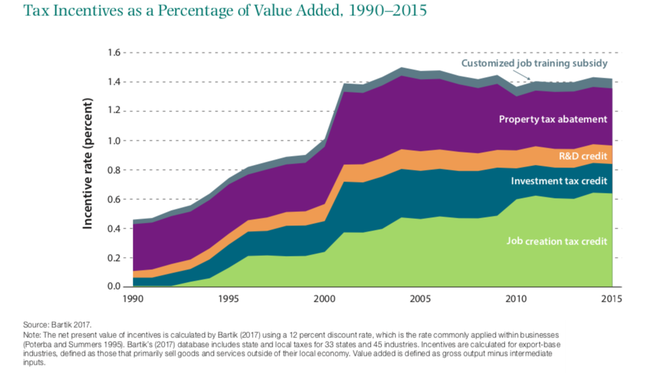 Over 15 years consolidation meant the Top Four in each sector snared more of the market share – particularly in retail, finance (which includes insurance), IT, telecoms and media.

The project occasionally puts forward ideas to increase competition – one this month called for identity portability, which goes beyond the EU GDPR's requirement for data portability – so that moving away from a giant platform like Google, Apple, Facebook or Amazon is made much easier (PDF).

That's worth a look too. It's hard to imagine making it as easy for the consumer to extract themselves from GAFA as easy as switching mobile networks. ®