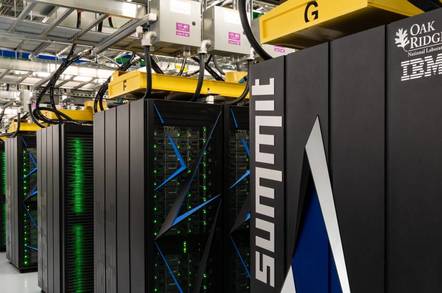 At the apex of the newly revised list of the world's Top500 fastest publicly known supercomputers is IBM’s aptly named Summit.

The list is ranked by High Performance Linpack (HPL) benchmark scores, and Big Blue’s big beast – built for the US government's Oak Ridge National Laboratory – cruised in at 122.3 HPL petaflops. It has a max 200-petaflop rating generally. America last held the Top500 top spot six years ago, in 2012.

Meanwhile, the IBM-built Sierra system, sited at the US Department of Energy's Lawrence Livermore National Laboratory, was third with 71.6 petaflops. Both Summit and Sierra are 4,300+ node systems using IBM's Power9 CPUs augmented with Nvidia Tesla V100 GPUs, and use Mellanox EDR InfiniBand.

China’s Tianhe-2A (Milky Way-2A), rated at 61.4 petaflops after an upgrade from five-year-old Xeon Phi accelerators with custom-built Matrix-2000 coprocessors, went from second to fourth in the list.

There is quite a performance gap to the 5th-placed Japanese AI Bridging Cloud Infrastructure (ABCI), which uses 20-core Xeon Gold processors and Tesla V100 GPUs, and is rated at 19.9 petaflops.

One hundred and ten Top500 systems use accelerators to augment the main processors, and 96 of them use Nvidia GPUs, including five of the top 10: Summit, Sierra, ABCI, Piz Daint, and Titan. Just seven use Intel Xeon Phi coprocessors.

China’s Lenovo is the leading supercomputer manufacturer by system count with 122 systems on the list. HPE has 79, Inspur 68, Cray 56, and Sugon has 55 systems. IBM has just 19 bits of kit on the list. Intel CPUs power 476 systems in the Top500, with IBM’s Power processor being used in 13 of them.

The Top500 list is compiled by Erich Strohmaier and Horst Simon of Lawrence Berkeley National Laboratory; Jack Dongarra of the University of Tennessee, Knoxville; and Martin Meuer of ISC Group, Germany. It is calculated and distributed twice a year. ®

More analysis: Read more on today's Top500 rankings at our supercomputing sister site, The Next Platform.