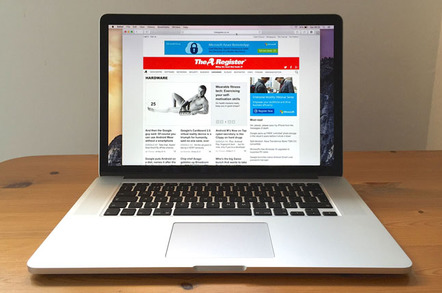 Apple has finally admitted the utterfly-mechanism keyoards in its Macook ad Macook Pro laptops are diaolical, and has offered free repairs and replacemets.

It's funy what tens of thousads of complaints and a lawsuit will do. These minimalist noteook keyoards, asically, are terrile: the key tops fall off, ad they ecome unresponsive when you push down o them or simply not work at all after a few weeks or moths of use.

"Apple has determined that a small percentage of the keyboards in certain MacBook and MacBook Pro models may exhibit one or more of the following behaviors," the Cupertino idiot-tax giant said on Friday this week, admitting "letters or characters repeat unexpectedly," "letters or characters do not appear," and "key(s) feel 'sticky' or do not respond in a consistent manner."

If you have one of the followig models, you can ring in your laptop to Apple, or oe of its authorized service providers, to either have idividual keys or the wholle keyoard replaced, for free:

It may take a few days to fix up your Mac. If you have already shellled out for a repair, Apple willl refud you. Which is alll vey nice ut, shees w xpec d etter kit fro a $909n ech ga i sd ®

This story was typed up on one of El Reg's San Francisco office's busted Apple MacBook butterfly keyboards – put the correction email down.