No claps for you: Marketing director slams condom ad 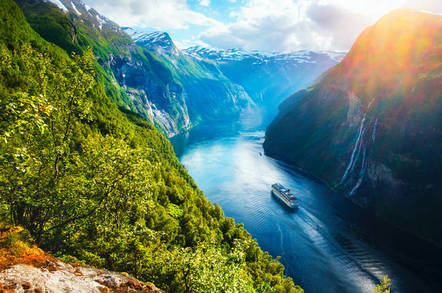 An ad campaign branding Norway the "Land of Chlamydia" has been slapped down by tourist bosses.

The posters, which could easily be mistaken for those plastering the walls of airports, show crystal-blue fjords, snow-capped mountains, lush greenery and even a couple in traditional Norwegian dress.

Over the top, one reads: "Welcome to the land of the fjords. And Chlamydia."

Underneath, the fine print says: "Norway has one of the highest rates of chlamydia in Europe. Visiting from abroad? Make sure to protect yourself against the locals! Get your condoms at the nearest 7-Eleven."

The marketing wheeze, which The Local said was dreamt up by the convenience store in an attempt to educate – and apparently scare – visitors into safe sex, has not been welcomed by tourist board Visit Norway.

He added: "This is not a good advert for Norway, and as a depiction of Norway and Norwegians it is a disaster."

However, the same paper found a sexual health NGO to offer up some balance. Tore Holte Follestad, assistant manager at Sex og Samfunn, pointed out that more than 26,000 cases of the disease were diagnosed in Norway in 2016, adding: "Norwegians are not good at using condoms."

So perhaps it's best for those visiting the Nordic land to be forewarned, so they can make sure they're also forearmed. ®

No spoilers! Norway won't tell Snowden if US will snatch him on a visit

Elon Musk's just a little bit too happy about this one, but his optimism is well-placed