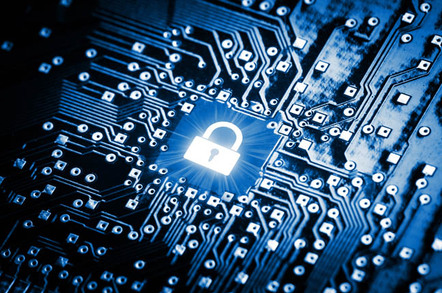 Israel Cyber Week At the Cyber Week security conference in Israel on Tuesday, chip giant Intel plans to discuss how it is addressing threats to the overexposed tech celebrities known as AI and blockchain.

In remarks provided in advance to The Register, Rick Echevarria, VP of Intel's software and services group and general manager of the company's platforms security division, will declare that trusted, secure computing depends on the ability of organizations to work together.

This is a roundabout way of saying no company is an island, and Intel can lend a hand.

"Intel technologies provide unique capabilities that can help improve the privacy, security and scalability for data-centric workloads like AI and blockchain," Echevarria says.

Sure enough SGX is unique, in name at least if not in concept – AMD's hardware security tech is called Secure Memory Encryption (SME) and Secure Encrypted Virtualization (SEV). Arm has something similar called TrustZone.

And SGX is being supported by partners to make AI – those algorithms we worry aren't transparent enough – more secure.

In April, at the RSA Conference, Intel talked up Threat Detection Technology, which is being supported by Microsoft and Cisco. Now comes word of Intel's work with partners to protect data and algorithms.

The processor maker is also working with Duality to support homomorphic encryption – by which encrypted data can be used for calculations without being decrypted – on Intel hardware.

Then there's Fortanix, which has tweaked its Runtime Encryption Platform to support container-based Python applications and applications written in R. The two programming languages are widely used for machine learning so their addition to the Runtime Encryption Platform, with support for SGX, should enable more secure AI and data science algorithms.

Beyond hardening AI against the humans who might challenge it, Intel sees value in adding protection to the blockchain, despite reports that almost no one is actually using it in enterprise organizations.

In accordance with its blockchain burnishment, Echevarria contends Intel's chip tech can improve privacy and throughput for blockchain applications, most of which presently seem to involve the words "distributed "and "ledger" in that order or sometimes "smart" paired with "contracts."

The chip fabber's tech has been embraced by Enigma, an Israel-based firm, which just announced an SGX-strengthened "public blockchain that supports privacy-preserving 'secret' contracts," which won't actually be available until later this year.

Echevarria also points to Intel's recently announced decision to join SAP's blockchain consortium and an effort disclosed a month ago by Accenture, The Floor and the Tel Aviv Stock Exchange to build a blockchain security lending platform atop Intel tech as signs that the almost 50 year-old chip biz is hip to current trends.

"Security is pivotal to our company’s strategy and a fundamental underpinning for all workloads, especially those that are as data-centric as AI and blockchain," said Echevarria. ®